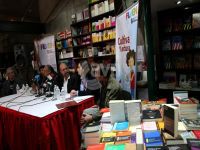 This year's International Book Fair, Filven 2012, takes place in Caracas from March 9 - 18. More than 300 activities are planned. Book presentations and authors' readings will alternate with conferences and workshops. Furthermore, there is an exhibition in homage to three Uruguayan writers.

Guide Gaddafi was a personal friend of President Chavez. Venezuela had close ties to the Great Jamahiriya before disaster struck, both nations being oil-rich countries with many common interests.

An interesting workshop will focus on contemporary Venezuelan poetry. Conferences will be held on such topics as "CELAC and the struggle for socialism," "Contemporary Latin American narrative," "Theory of Venezuelan history," "World crisis and revolution in Latin America" and others.

This year's Filven is an homage to Uruguay, its literature and dance theatre.

The Uruguayan Contemporary Dance Company will open the Book Festival with a choreography by Uruguayan Martin Inthamoussu. An exhibition shows the books of three Uruguayan authors, Carlos Liscano, Eduardo Galeano and Mario Benedetti.

Carlos Liscano, born 1949 in Montevideo, was a member of the Tupamaros, just like current Uruguayan President Jose "Pepe" Mujica. They share memories of prison and torture. Liscano was imprisoned from 1972 to 1985, during the military dictatorship of Jorge Pacheco. In a sinister prison, ironically named "Liberty," Liscano started writing.

After his release he moved to Sweden and remained in his Swedish exile until 1996.
Carlos Liscano's "Truck of Fools: A Testimony of Torture and Recovery" is available in English, published by the Vanderbilt University Press in 2004.

Eduardo Galeano, born 1940 in Montevideo, wanted to become a football star in his youth, but became a writer instead. He started his career as a journalist in the early 1960s as editor of Marcha, an influential weekly journal.

After Pacheco's military coup, Galeano was also imprisoned and later forced to flee. He spent three years in Argentina, then moved to Spain.

In 1985, he returned to Uruguay and took part in the creation of TeleSUR, the Latin American television station based in Caracas, Venezuela.
Numerous works of his have been translated into English. Recurrent themes are the contrasts between freedom and slavery, democracy and dictatorship.

Galeano's "Mirrors" (Espejos) offers a broad mosaic of Latin American history, told through the voices of the unseen, unheard and forgotten, recalling the lives of artists, writers and visionaries. The book is available in English from Nation Books, published in 2009.

Mario Benedetti (1920 - 2009) was a Uruguayan journalist, novelist and poet. During Pacheco's military dictatorship, from 1973 to 1985, Benedetti lived in exile in Argentina, Peru, Cuba and Spain.
He died in Montevideo in May 2009, suffering from respiratory and intestinal problems. Shortly before his death, Benedetti dictated his last poem to his secretary. It has remained a fragment:

My life has been like a farce
My art has consisted
In this not being noticed too much
I have been as a levitator in my old age
The brown sheen of the tiles
Never came off my skin ...

"Not being noticed too much" may be understood as a slight understatement, since Benedetti is one of the best-known Latin American writers. He won numerous international awards and was granted a Honoris Causa Doctorate by the University of the Republic, Uruguay.

Benedetti's collections of poetry have been translated into 20 languages. Worthwhile readings are his "Little Stones At My Window" (Piedritas En La Ventana), a bilingual edition published by Curbstone Press in 2003.

Each book presented at the Filven 2012 in Caracas is a "little stone" at the window to Latin America, giving viewers a peek at the literary production of this exotic and magnificent continent.