In Iran, the results of the parliamentary elections are getting finalized. The western channels were quick to declare that the Conservatives have won. The opposition to the current Iranian President Mahmoud Ahmadinejad will receive the majority of seats in the new parliament. Its representatives, united against him around the current Speaker of the Parliament Ali Larijani and Tehran Mayor Mohammad Baher Kalibafa in the "United Front of Conservatives" (UFC), criticized the President for the deteriorated economic situation in the country. 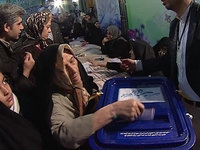 Another conservative coalition represented by the "Front of continuation of the Islamic Revolution", considered the mouthpiece of the ideas of the spiritual leader of the Islamic Republic Ayatollah Ali Khamenei, with reservations defended the course of Ahmadinejad, although were severely pressing his right hand Esfandiari Rahim Masha and criticized the "spineless" policy of Larijani and Kalibafa.

Some analysts describe it as a manifestation of a serious internal crisis in the Islamic Republic, fraught with future tribulations. Certain politicians already predict the decline of "the era of Ahmadinejad" in the political history of Iran. But is it really the case? Elena Dunaeva, an expert with the Center for the Middle East Studies at the Institute of Oriental Studies answered this and other questions in an interview with "Pravda.Ru":

"It would not be correct to say that in this election the conservatives won over the reformers, because only the representatives of the latter participated in the election, represented by three different movements. As such, the reformist camp, speaking for the easement of the Islamic principles, has left the arena during the election in 2009.

It should be noted that Mousavi was only a notional figure that headed this camp, a representative of the extreme reformers associated with a foreign green movement.

In any case, in 2009 the radical reformers were completely suppressed. Only moderate representatives of the reformist camp are left. During this election they did not dare to go out with similar slogans.

As for the Conservatives, they can be divided into three groups: conservatives-traditionalists, led by Ali Larijani, the extreme radical conservatives, and several smaller groups that can be roughly described as conservatives-pragmatists, who spoke strongly against the government of Ahmadinejad.

As for the reformers, in this election they were represented by two associations of the coalition that are not political parties. As I said above, they do not even dare venture out with reformist slogans and preferred to talk about more faded ones like "democracy and justice."

Based on the processed data, it is moderate conservatives strongly opposing Ahmadinejad who won the election. I will note that no global changes, at least until the presidential election, should be expected. Although some Western and Arab channels were quick to interpret this as a manifestation of a serious internal crisis in the country fraught with a big explosion, in fact, this is not the case.

Just remember that the Conservatives were rather highly visible in the last Parliaments. They also favor the continuation of the nuclear program and opposition to the West. In some ways they do it even more actively than Ahmadinejad.

Now the conservatives have a goal of removing him and preventing the groups supporting him from getting into power. Most likely, this can happen, but after the presidential election. In the meantime, we are observing the continuation of the rivalry between the executive (presidential) and legislative authorities, headed by the Parliament. Further, the Conservatives are planning to significantly weaken the executive branch through the possible introduction of indirect presidential elections and do not rule out the abolition of the presidency itself.

But this is details. The main thing that these elections have demonstrated is that generally, the Iranian people support the Islamic Republic and Ayatollah Khamenei. No "global shocks" reported by many publications in the West, will take place. The voting results clearly show that the protest movement in the country does not have a steady ground.

The relevant indicator here is the fact that the reformers' calls to boycott the elections remained virtually unnoticed by the Iranians. It is indicative that during the past voting the turnout was 56 percent, while this time it is 64 percent."