Georgian President Mikhail Saakashvili proposed to unilaterally abolish visa regime with Russia. In the first place, as claimed by the Georgian leader, this way he expects to improve the economic situation in the country: "We need all Russian businesspeople to know that they could come to Georgia, invest money, bring money in, take money out, do business, open manufacturing facilities, and employ people. It will be protected. They will be free to move just like representatives of other countries. We will arrange a more convenient way for them as soon as possible. We welcome the economic relations with Russia. Georgia will never be closed for Russian investors and Russian tourists whose number we expect to be at approximately 100,000." 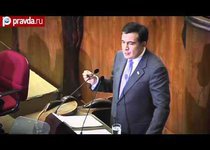 Of course, the statement of the President of Georgia was not without populism: "Let all Russian citizens know that they can come to our country, which is different because it is free from corruption, violence, and violation of human rights. I expect that in the place with rapidly developing business there will be no room for the rumble of tanks. Therefore, we provide a greater chance of peace."

Since the completion of the August 2008 war the relations between Russia and Georgia have not changed dramatically for the better. Since Russia's recognition of South Ossetia and Abkhazia there have been no diplomatic relations between Moscow and Tbilisi. In addition, Russian law enforcement authorities accuse Saakashvili of genocide and conduct an investigation of Tbilisi actions in South Ossetia.

It should also be noted that back in the summer of 2011 Russian President Dmitry Medvedev said that Moscow was ready to consider proposals on easing the visa regime with Georgia from the Georgian leadership, but not Saakashvili.

In turn, as pointed out by Russian Foreign Minister Sergei Lavrov, the visa regime with Georgia will not be abolished, but Moscow will retain civilized relations with Tbilisi in terms of the order of entry and exit of citizens.

What was behind the intention of the Georgian president offering to abolish visas for Russians? Georgian and Russian experts Giorgi Khukhashvili and Anton Krivenyuk shared their thoughts in an interview with "Pravda.Ru".

Giorgi Khukhashvili, chairman of the Research Institute for the Development of Georgia: "The President made a purely populist political statement that has nothing to do with the economy and cannot produce real effect. Saakashvili says he wants to increase the attractiveness of Georgia for Russian businessmen and tourists, but how? In the past three and a half years since the war there have been many positive changes in Georgia. For example, the fact that the authorities have managed to largely overcome corruption in police. But these individual successes cannot reverse the overall negative situation.

Visas are granted without any problems, but it does not eliminate the main barrier to economic development in Georgia. We have nomenclature capitalism. The authorities in the country control everything that brings income, up to kiosks. In addition, political risks in Georgia for Russian businessmen are very high. The first requirement for doing business in Georgia is tolerance.

In addition, those Russian companies that want to work in Georgia have already arrived here. Not to be unfounded, I will say that they, in fact, control our energy, banking and telecommunications market, including the RAO "UES".

Unfortunately, these PR stunts cannot change the general negative attitude of the Russian public with respect to Georgia. The initiative of Saakashvili looks strange in the sense that in one speech, he tried once again to look like a fighter with "the Russian threat," and immediately after expressed a desire to develop relations with Moscow. Or, abolishing visas with Russia that now and then he calls an enemy of Georgia, for some reason he does not do the same for the EU. Such thinking seems paradoxical, though not so surprising for Saakashvili. "

Anton Krivenyuk, chief editor of the Georgia Times: "This is a clear populist move by the Georgian President, aimed, on the one hand, at taking the electorate away from Ivanishvili in the coming elections, and, on the other hand, appearing innocent and amicable before the West, tired of his previous rhetoric about Russia.

Saakashvili is playing with Russia, but is Russia playing with him? In my opinion, it is not, and rightly so. Note that in practical terms, the abolition of visas for Russians, as nice it may sound, does not mean much. With respect to the citizens of Russia Georgia already operates in a fairly light mode. The visa fee is also not critical for the Russians - 20-30 dollars."