Kyrgyzstan bids farewell to Russian and US airbases

Kyrgyz President Atambaev made a new attack at the Russian military presence in his country. First of all, we are talking about the largest military facility of Russia in Central Asia - Air Force Base in Kant. According to him, this object only "flatters the vanity of the Russian generals" without performing any function. 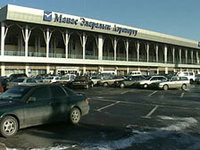 The reason for another attack on the base at Kant was the fact that the Russian side has not yet paid the cost of rent for four years ($15 million).

In addition, Atambayev complained that the "base must fulfill certain obligations, such as train pilots for Kyrgyzstan. All these years we have been paying for electricity, water, heat, and telephone and have nothing in return... What does this base do? What has it done for Kyrgyzstan?"

News agencies quoted another critical remark made by the Kyrgyz President regarding the fact that the base in Kant does not protect Kyrgyzstan. As an example, Atambayev talked about the episode that led to the events in Osh in 2010.

Atambayev did not put forward any kind of ultimatum to Russia: "For now we have automatically renewed the contract for the Russian base, but I believe that every country must defend itself. It would be more logical if Kyrgyzstan was connected with Russia not through some sort of base but a single economic space, a common external border. That would be logical. And not just a whip applied to Kyrgyzstan."

On the other hand, the Kyrgyz President also ruled out the likelihood that Bishkek will give the object to the Americans.

Meanwhile, Atambayev intends to close the U.S. base at Manas, citing the fact that such military facility cannot be located on the territory of a civil airport. Previously, he also complained that the Americans have caused substantial harm to the Kyrgyz ecology. A case in point is the protests of local people living on the land adjacent to the Manas base, dissatisfied by the fact that American pilots drop tons of unfinished petroleum on their fields on a daily basis.

The Kyrgyz authorities through the threats of closure of the military base Manas achieved a gradual increase in the rent of the facility every year. But now, as Atambayev stated, "the decision to close the U.S. Air Base Manas in 2014 is a principle one, and not an attempt to extort the money from the United States."

However, in the event that the Americans really cease, as planned, the operation in Afghanistan in 2014, the need to preserve the object will simply disappear, because it is mainly used as a center of transit for the occupation forces.

It seems that Atambayev's "anti-militarist" statements are used to make him look like a "strong politician" that can speak on equal terms with the great powers. These thoughts are confirmed with another important statement made by the Kyrgyz President. According to him, he does not care who will build a new training center for the local military - Russia or the United States, "if a group of military instructors and advisers remain under this sign, we will not agree. We do not want to play these war games with anyone."

Andrei Grozin, Head of the Department of Central Asia and Kazakhstan of the CIS Countries Institute explained the reasoning behind such rhetoric of the Kyrgyz president in an interview with "Pravda.Ru":

"Of course, an important role in the emergence of such statements is played by a difficult domestic situation in Kyrgyzstan. We cannot rule out the fact that he would either have to accept the resignation of the government, or declare extraordinary elections to the parliament.

On the other hand, this position has a right to exist and is understandable. For Kyrgyzstan it would be more painless not to host any kind of foreign military facilities because they infringe upon the sovereignty. The Kyrgyz laws are not effective on the territory of such bases.

Of course, there is another argument when the country whose military facilities are located on the territory of another country automatically protects it. However, the foreign policy risks associated with hosting these facilities in the country cannot be ignored either. This is especially true of the American bases that are an additional stimulus for the radical Islamic opposition.

The behavior of another Central Asian country, Turkmenistan, in this sense is quite exemplary. For the last 10 years it has been trying to prevent the emergence of foreign military facilities on its territory.

As for the specific Russian airbase in Kant, it should be noted that Atambayev does not have any demands in this regard. He has very polite requests and offers Russia his options for resolving the problem, ranging from the training of his military and ending with deducting the money from the net debt of Kyrgyzstan to Russia."