France spends over 17 billion annually to maintain its vampires

Shortly before the presidential elections in France the situation in one of its overseas territories, the island of Reunion, has deteriorated. Interestingly, the standard of living on the island is greatly inferior to the French. The same pattern is observed in other overseas territories - Guadeloupe, Martinique, and French Guiana. 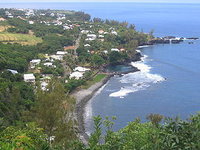 The current events in Reunion look very much like the pogroms that now and then occur in the immigrant neighborhoods of Paris, Marseille, Lyon and other cities. The reason for the unrest is normally the actions of law enforcement against young Arabs, blacks, people from Indian or Gypsy origin. The same was true for the distant overseas territories.

On February 23 the court of the administrative center of Saint-Denis, Reunion, sentenced several young people. In response, a group of young people took to the streets and clashed with the police. They set cars and garbage containers on fire. In one case, a Molotov cocktail landed on a policeman's head. In response, law enforcement officers were forced to use tear gas and water cannons. French military units were sent to the island.

While the suburbs of Paris are the disadvantaged centers (albeit large) in a relatively stable French Sea, Reunion, located in the western Indian Ocean, is a zone of prevailing depression. The same situation is observed in the American possessions of France - Guadeloupe, Martinique, and French Guiana.

The bulk of the population of these territories is descendants of African slaves exported there. Nearly a quarter of the population of Reunion came from India. The distance between these islands and the mother country is thousands miles. Nevertheless, their inhabitants are full-fledged citizens of the Fifth Republic, electing deputies to the National Assembly and senators to the Senate. They can easily enter France and do not need visas. They have self-governments, but the senior officials on the islands are prefects appointed from Paris.

The level of GDP per capita before the crisis in Reunion was $6,800 dollars, and in France - over $42,000. According to the statistics of the European Commission, Reunion, Guadeloupe, Martinique and French Guiana are among the poorest regions in the EU along with Bulgaria, Romania and eastern regions of Poland and the Baltic countries. The income level of residents of the overseas departments is nearly twice as low as the EU average.

What is the main source of income in these areas? Reunion grows sugar cane and exports sugar, rum, vanilla, bananas and pineapple.

Approximately the same situation is in Guadeloupe and Martinique. French Guiana has a larger area with mineral deposits. All these areas are located near the equator and are beautiful resort areas. Yet, sugar, bananas, and the beaches will not get them far. Major industries are not even in sight.

Despite the crisis, France transfers into its overseas regions many billions of euros in the form of grants (as of 2010 - 17.2 billion). Approximately 40 percent of the residents living on distant islands are given allowances, compared with 10 percent unemployment in France. Every year, thousands of them move for permanent residence to the metropolis, where they often join the ranks of the unemployed residents of Parisian and other suburbs.

The French ownership of the distant islands is the legacy of the colonial period. Reunion has been controlled by Paris for nearly 300 years. All these islands have movements for independence. But today the residents of the overseas regions do not dream of it. Two years ago French Guiana and Martinique held referendums on independence, and the vast majority preferred to remain under the authority of the former colonizers.

The inhabitants of the overseas regions are relatively well settled. But why France, even in times of crisis, does not cease to allocate many billions of euros to finance the distant poor areas? Sergei Fedorov, a leading researcher at the Institute of Europe RAS shared his thoughts in an interview with "Pravda.Ru".

"Possession of overseas territories and islands scattered around the world and across continents is an essential attribute of a great power, the embodiment of imperial power for France. If we look at the numerous islands in the surrounding marine areas (200-mile zones), we will see that the number of possessions of France is second only to the United States.

France takes full advantage of the geographical location of its overseas territories. The islands host powerful naval bases to monitor the entire world ocean. Guiana is home to space center "Kuru." France has no intentions to renounce its influence and bases and, therefore, is willing to pay all expenses.

The overseas residents are quite satisfied with the current state of affairs. While there are nationalism and independence movements, the majority of people do not want to be separated from the mother country. They are full French citizens, many attached to French culture. The advantages of staying in the metropolis for them are much greater than the disadvantages.

Of course, the overseas territories have their economic issues. The standard of living there is lower than in the metropolis, but it happens in every country. Popular unrest happens once in a while. In general, the French state is coping with its overseas territories quite well and keeps the situation there under control. The French are trying to solve the existing issues."