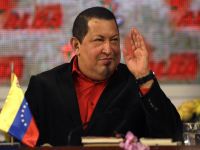 While in some countries Valentine's Day is celebrated in the middle of February, Venezuela celebrates National Youth Day each 12th of February.

This year, a huge civic-military parade took place in La Victoria, state of Aragua, to commemorate the battle for Venezuelan Independence on 12 February 1814, attended by thousands of young people who had travelled to the gathering in buses and cars.

President Hugo Chavez took part in the parade and spoke to the crowd of 50.000 people. "We are here today with all our heart ... to celebrate the young, new, revolutionary, and socialist homeland," he said.

National Youth Day serves two purposes. Firstly, it values Venezuelan youth with its potential of creativity and vigor as vanguard in the revolutionary process of "Socialism for the 21st Century."

Secondly, 12 February 1814 is commemorated by Venezuelan patriots as day of the Battle of La Victoria, when Jose Felix Ribas won a decisive victory over the Spanish colonial army in the town which is called La Victoria today.

Born in Caracas in 1775, Jose Felix was the last of eleven sons in the Ribas family. At the age of 21, he married Maria Josefa Palacious, the aunt of Liberator Simon Bolivar.

Along with other fellow Republicans, Jose Felix Ribas became a member of the "Sociedad Patriotica," soon to be engaged in Venezuela's War of Independence against the Spanish crown.

In the Battle of La Victoria, Ribas foiled the advance of the Spanish forces with his troops composed of youths, mainly students and seminarists from Caracas. Ribas told them, "We have no choice between victory or death, we must achieve victory," which they did.

Today, La Victoria is the capital of Jose Felix Ribas municipality in the state of Aragua. The town has 68,000 inhabitants. It is located on the highway between Caracas and Valencia, at an altitude of 550 metres above sea level.

Besides "Avenida Victoria," Liberator Simon Bolivar is present in the quarters of Bolivar North and Bolivar South.

Furthermore, there is a "Barrio Libertador".
The famous battle has been eternalized in the name of another street, "Calle 12 de Febrero." Of course, the Bicentenary of Independence is celebrated in "Avenida Bicentenario." Thus, victory is omnipresent in La Victoria.

This year's commemoration started at 9 o'clock in the morning, when citizens of the town deposited flowers at the equestrian statue of Jose Felix Ribas. Ivan Josue Hidalgo Teran, Director of the Aviation Academy, was responsible for the civic-military parade. A minute of silence was held in respect of all those patriots who lost their lives on 12 February 1814.

In his speech, President Hugo Chavez stressed the fact that many Venezuelan youths gave an example of sacrifice for the homeland in the Battle of La Victoria.

"Love of the homeland, love of Venezuela is concentrated here today," he emphasized.
Then he read aloud a few suggestions concerning Venezuela's economic, political and social development from a compendium for the National Simon Bolivar Project 2013 - 2019, written by young people organized in PSUV Juventud, The United Socialist Party's youth organization. Chavez congratulated the young people for their fresh ideas and encouraged them to "continue building the homeland."

The festivities mirror Venezuela's love of youth, a country with strong demographic growth. Young people are the wealth of a nation. Venezuelan politics are setting their priorities accordingly.

In July 2011, the Chavez administration created a new Ministry of Youth and appointed Maria Pilar (Mari Pili) Hernandez for the post. During her inauguration ceremony in the Miraflores Palace of Caracas she promised to "attend and serve this great force which is our homeland's youth."

Many young Venezuelans hold membership in the youth organization of PSUV, which has grown into a mass movement throughout the country. A lot of youths feel committed to President Hugo Chavez, knowing that the revolution is the path they must take.

The National Day of Youth in La Victoria showed clearly the importance that youths have for the Bolivarian Revolution of Venezuela.