The health condition of Yulia Tymoshenko, the former Prime Minister of Ukraine and currently a prisoner of Kachanovsky Colony in Kharkov, receives a lot of attention in Ukraine and other countries. The Western media make their special contribution to the subject, although Western journalists are not concerned much about Lady Yu's health. Her political future is much more important for them. Foreign publications actively support the prominent Ukrainian politician, claiming that the sentence against her was unfair. 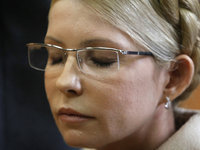 Italy's La Repubblica newspaper wrote, for instance, that Tymoshenko's health condition was poor. Italian journalists believe that President Yanukovych tries to rot Tymoshenko in jail to sell Ukraine to Russia. The publication referred to the remarks from her lawyer Andrei Kozhemyakin. "Yulia Tymoshenko feels bad, very bad. She is being killed slowly in jail," he said.

It is worthy of note that the authors of the article in the Italian newspaper did not give a word to Tymoshenko's adversaries, although there are many of them in Ukraine.

Having referred to the opinion from Yulia Tymoshenko's follower, the Italian publication called the sitting Ukrainian administration "authoritarian." They also wrote that Yanukovych was a "pro-Russian" politician, with a negative connotation.

"No person - no problem. Yulia is the leader of the Ukrainian opposition. Two years ago, when she lost the elections, Yulia announced that Yanukovych had won through scheming. According to Kozhemyakin, the incumbent president has taken revenge on Tymoshenko," the article said.

"Yushchenko betrayed both Yulia and the ideals, which he was following and which helped him win the elections. A year after his election, Yushchenko got rid of Tymoshenko and conspired with his former enemy, Yanukovych. Since then, the two of them have been selling Ukraine to Moscow oligarchs," the Italian journalists concluded. No one has seen any examples of this sale, though.

Another Italian publication, Legno Storto, wrote an article about Tymoshenko too, although the piece was mostly devoted to Yanukovych. The Ukrainian president attended a security conference in Munich, Germany, but found himself in complete isolation. "Yanukovych was in isolation. In Munich, he had an opportunity to participate in only one conversation - with US Secretary of State Hillary Clinton. Clinton harshly criticized him for his authoritarianism in Tymoshenko's case," the article said.

According to Legno Storto, foreign doctors were allowed to examine Yulia Tymoshenko only for the sake of Ukraine's European integration. "He said at one of the news conferences that Tymoshenko was the only obstacle for Ukraine's integration in Europe. For this reason, he gave the European and North American doctors to see the leader of the "orange revolution," the publication said.

Germany's Sueddeutsche Zeitung is certain that the sitting administration of Ukraine is settling scores with Tymoshenko and orange activists in general. "In the case of former Interior Minister Yury Lutsenko, who is also one of the orange leaders, the Kiev administration is unwilling to make compromises. He also complains of insufficient medical servicing. He said that his liver started aching in the prison," the article said.

The political motivation of this case, the German newspaper said, was obvious. "She has strong pains in the back. She has been unable to walk by herself since her therapy, which she had been receiving after a car accident, was interrupted after her arrest. Spokespeople for several European states said that Europe considers the process politically motivated," the paper wrote.

The US-based Foreign Policy blog referred to Tymoshenko's daughter Yevgenia. "The conditions of the Soviet Union and the Stalinist regime are back in Ukraine," said Yevgenia Tymoshenko.

"The daughter of imprisoned former Ukrainian prime minister and opposition leader Yulia Tymoshenko is in Washington this week trying to raise awareness of her mother's condition and the deterioration of democracy in Ukraine," Joshua Keating wrote.

The author asked Yevgenia whether mass riots could be possible in Ukraine.  "If my mom is out of prison, it's possible," she replied. "That's the reason she will not be freed unless the course of action is changed," Yevgenia answered.

However, it appears that the riots should have occurred immediately after Tymoshenko's imprisonment. One may not say that there are no demonstrations in the country at all, although they can not be referred to as an anti-government uprising.

Polish newspaper Krytyka Polityczna believes that Yanukovych would eventually have to make a decision, because the international situation is getting more and more unprofitable for Ukraine. The agreement on the association between Ukraine and the European Union has not been signed because of Tymoshenko's imprisonment.

It appears that the Western press perceives Tymoshenko as a "pro-Western girl. For the West, Tymoshenko seems to be much better than Yanukovych, a "pro-Russian guy." No one tries to look into the details of her case. The West simply prefers Tymoshenko, because politicians like her will pull Ukraine away from Russia and take it closer to the West.