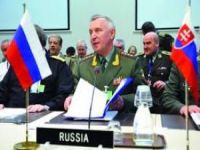 An attack on Iran might happen in the summer, the Chief of Staff of Russian Army General Nikolai Makarov, warned today on the channel Russia Today. When referring to the tensions created around the Islamic Republic's nuclear program, Makarov noted that the West, especially the military in Washington and Tel Aviv, are preparing an act of war against the Persian country in April or no later than June this year.

The argument used for aggression, which Tehran considers artificially made to justify a war, refers to the alleged Iranian attempt to develop a nuclear program with military pretensions.

But Iran defends its right to use atomic energy for peaceful purposes and to produce fuel for its nuclear facilities.

The West reacts with bellicosity and more unilateral sanctions against the Persian state each time it refers to new programs to develop the atomic sphere and to reiterate its peaceful character, the source warned.

Makarov reiterated that Iran was the target of cyber attacks, while many of its scientists were victims of fatal attacks, whose authorship Tehran attaches to Israeli intelligence.

Moreover, the United States maintains a large concentration of naval forces in the Persian Gulf and the Strait of Hormuz, while Tel Aviv now accuses Iran of being behind the alleged attempts to organize attacks on Israeli embassies in Tbilisi and New Delhi.

The Russian military considered that the outbreak of a conflict with Iran could spread through the Middle East with a domino effect and unpredictable consequences, with the possibility of becoming even in an international confrontation.