Ahmadinejad says they will not yield to western threats 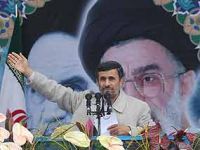 Millions of Iranians demonstrated on Saturday (11th) to celebrate the 33rd anniversary of the Islamic Revolution, amid growing external pressures and the Government's assertion that it will not yield to threats from the west.

The commemoration that marked the date of the overthrow of the last Shah of Iran, Mohammad Reza Pahlavi in ​​1979, occurred in more than a thousand cities and towns, and about five thousand villages across the country, according to state television and other media reports.

Since the early hours of Saturday, hundreds of thousands of people convened on Tehran to march to Azadi square (Freedom in Persian), where President Mahmoud Ahmadinejad delivered a speech.

Ahmadinejad, who was accompanied by the leader of Palestinian Islamic Resistance Movement (Hamas), Ismail Haniyeh, defended the sovereignty of Iran and its peaceful nuclear program, while announcing the opening "very soon" of "important nuclear projects."

For his part, the supreme leader of the Islamic Revolution, Ayatolah Ali Khamenei, stressed that unity is "a prime necessity for every Muslim," and defended the country's strong stance against the United States and its European allies.

Authorities said more than 300 foreign journalists and approximately 1,500 Iranians covered the celebration ceremonies and demonstrations for the historical event that ended 2,500 years of monarchy.

Both Ahmadinejad and Khamenei highlighted the figure of the founder of the revolution, the late Ayatolah Ruhola Khomeini, and his inspiring example for the popular movements that play the lead role in grassroots revolts in Arab countries, which is called the "Islamic Awakening" here.

On eve of the date that culminates 10 days of celebrations and exhibitions of military and scientific achievements, the Foreign Minister, Ali Akbar Salehi, reiterated that Iran "will not surrender to threats from the West."

During an interview with local television Channel Three, he reiterated that the Islamic Republic continues to move forward with its peaceful nuclear program and has taken "appropriate precautions to deal with any possible scenario."

Nevertheless, he added, Tehran stands ready to support negotiations with the western powers agglutinated in the so-called 5 +1 group (the permanent members of UN Security Council plus Germany), that he berated for "some ambiguities."

"Iran is trying to answer these ambiguities of the G5 +1. They should trust us and we will take the required measures within the framework of our nuclear safeguards," he added.

Salehi deplored the economic sanctions of the European Union and the United States, as well as threats of aggression against them by Israel, but noted that this country will soon announce "new nuclear achievements" as Ahmadinejad said in his speech on Azadi Square.