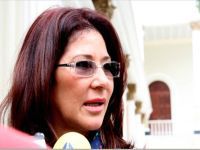 The Chavez administration, in its attempt to create a new state of law and social justice, has promoted three female lawyers into high judicial positions.  Is Hugo Chavez's message that he thinks women more capable of humanizing prisons and reforming the penal code than men?

Cilia Flores, born on the 1st of January 1953 in Tinaquillo, state of Cojedes, received her law degree from the Santa Maria University in Caracas. She is specialized in Penal Law and Labour Law.

In 1993, she founded the Bolivarian Circle for Human Rights (Circulo Bolivariano de los Derechos Humanos). Flores has been a member of Venezuela's National Assembly since 2000 and served as its president from 2006 to 2011.

She is a member of PSUV (United Socialist Party of Venezuela) and married to the country's Foreign Minister, Nicolas Maduro.  On January 31 of this year, President Chavez promoted Cilia Flores to the position of Attorney General of the Republic.

Flores sees justice as the most important of social services, the judicial system needs to be adopted accordingly.

The second prominent woman of Venezuela's judicial system, Luisa Ortega Diaz, was born on the 11th of January 1958 in Valle de la Pascua, state of Guarico.

She graduated in Law from the University of Carabobo and specialized in Penal Law at the University of Santa Maria in Caracas, where she is currently teaching as professor. Ortega Diaz has worked as legal consultant for Venezuelan State TV, Venezolana de Television.

In her capacity as State Prosecutor, Ortega Diaz said that 1,015,767 judicial cases were solved and 807,811 new cases were received in 2011. Although many cases still remain open, 2011 was the first year that the number of cases solved exceeded the cases received, she pointed out.

In 2012, 1.5 million cases will have to be solved, Ortega Diaz said. "Operation Cayapa" is the name of the program to speed up the process of judicial cases.

The third woman in the judicial trio is Iris Varela, born in San Cristobal, state of Tachira. She graduated from the Catholic University of Tachira, specialized in Constitutional Law and Penal Law.

Varela has been a member of Tachira's National Assembly since 2000, recently reelected to serve until 2016. She is a member of PSUV and was promoted to the newly created post of Minister for the Penitentiary System by President Chavez on the 26th of July 2011.

Her program "Llego La Chamba" (Work Has Arrived) offers productive jobs in the areas of agriculture, bakery and carpentry to inmates of all 34 Venezuelan prisons. These jobs are adequately remunerated, giving the prisoners the possibility of making and saving money in their chosen area of work.

Moreover, inmates have begun to restore their facilities with the program "Operation Cambote". The Chavez administration is of the opinion that prisoners need to live in decent places and must help in the upkeep. It will give them something meaningful to do and augment their morale.

Venezuela's humanistic approach to prison reforms is an integral part of "Socialism for the 21st Century."