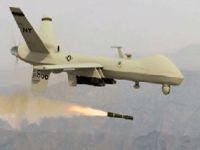 This policy is part of plans to cut conventional forces as a consequence of the fiscal imbalance that affects the U.S. economy in recent years, he said to the daily newspaper The Wall Street Journal.

Over the next five years, the United States will reduce the number of military personnel by 92,000 and apply millions in cuts to its budget, the Pentagon chief said.

The budget plan which will be released this month, includes an increase of 30 percent in the fleet of U.S. drones, according to officials quoted by the Washington Post, in an attempt perhaps to effectively compensate for troop reductions.

The newspaper stated that the Pentagon's plans are addressed by the mobilization of these devices on bases around the world to operate in missions against other nations in a "remote war," experts explain.

Industry sources indicate that over 30 billion dollars will be budgeted over the next five years to acquire unmanned planes, five billion during 2012 to increase purchases of equipment that patrols the world on missions of espionage and combat.

The use of this technology dates back to the previous century, and gained wide publicity during the U.S. occupation of Afghanistan in the alleged hunt for Osama bin Laden and key Al Qaeda leaders.

However, the most notable actions occurred in Pakistan, where their use has cost the lives of hundreds of civilians in what the Pentagon euphemistically describes as "collateral damage" victims.

According to the website lapistaoculta.com, the CIA violates the airspace of the Americas, Asia and Africa with ever greater frequency.

While the program's military use of drones over Afghanistan and Iraq is overseen by the Pentagon, the CIA directs the operations in countries where there is no war declared when it is deemed necessary, he added. The site states that, covered in this program, Obama maintained all key personnel in their posts that had been provided when George W.Bush signed a secret memorandum that gave the CIA permission to kill members of Al Qaeda and their allies anywhere in the world, ratified by Congress.

Currently, Israel is the main exporter of drones, but Washington aims to reach the top spot.

For example, when Bush launched his so-called "war against terrorism," the country had only 50 devices of this type. Its fleet is currently about seven thousand, military analysts point out.

The General Atomics Aeronautical Systems, manufacturer of the Predator and Reaper, now joins Northrop Grunmann in allocated contracts of about 25 billion dollars.

Other companies like Lockheed Martin and General Dynamics (GD) also compete for this market, and the latter company has been located in Fort Huachuca, Arizona, the largest training center in the world for drones.

According to military sources, there are runways in Guam, Turkey, Ethiopia, Colombia, South Korea and Kyrgyzstan, among other countries, and flights are directed from Beale Air Force Base in California, Wright-Patterson in Ohio; Grand Forks in North Dakota, or in Nevada and Texas.

Distastefully, in the last five years, drones have become the darling in the eyes of the CIA and were even protagonists in Yemen, killing U.S. citizens, supposedly terrorists.

On the other hand, the announcement that the United States will expand its global network of drones is a ratification of the war policy of this country that considers itself above international law, according to political commentators.

A simple analysis of the Additional Protocol I of the Geneva Convention of 1949 states in its article 51 that "the civilian population shall not be subject to attacks" such as those performed against Pakistan.

All this was violated, for example, in a massacre against those who participated in a funeral that was attacked by drones. They suspected a Taliban leader would be participating.

Even the U.S. legal code in its Chapter 18, Section 2331, defines international terrorism as violent activities or acts that endanger life with the intent to intimidate or coerce a civilian population, influencing with these acts a government and / or affecting the government by mass killings, destruction and kidnappings.

This is a definition that perfectly fits to identify the covert war of drones, but which the Americans ignore.

The use of this technology does not take into account that these laws blame individuals who plan, order or commit reckless or deliberate attacks, failing to distinguish between civilians and combatants, and are responsible for war crimes.