Lies, deceit, blackmail, bullying, murder, torture, concentration camps, destruction of property, looting, massacres... all these words pale into insignificance when we look at what NATO has done in Libya - and intends to do to Syria within a few days. The sickening evidence coming out of Libya underlines what we are dealing with. 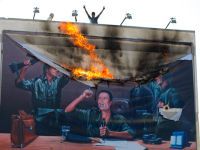 It is very difficult to imagine that Messrs. Cameron, Hague, Sarkozy, Juppé, Obama and Hillary Clinton are happy with their legacy in Libya. In fact, what they have done there would lead any normal human being to the depths of desperation; in a professional context, it would involve a dismissal and in a military one, a court martial or a dishonourable discharge.

NATO's mission in Libya was to impose a no-fly zone to protect innocent civilians. Quite how anyone could have been so naïve as to believe that, after what NATO did in Iraq, defies logic; quite how anyone could have believed them as they promised to fill in the details later, ditto. But the international community once again gave NATO the benefit of the doubt and once again NATO performed on cue: another massacre, another example of arming terrorists, more killings, more violence, more torching of property, more torture, more rapes and another generation of children with their futures dashed to ruins.

Another country bites the dust? If God exists and if Satan does not rule this world already, then Libya can and must be NATO's last stand; right must defeat wrong; good must triumph over evil; the Demon must be slain and NATO must lose any power it had.

I have been privy to some horrific images on you.tube, of children with their faces blasted off by NATO pilots from 30,000 feet, after NATO refused to allow the Libyan authorities to hold a free and fair election. And now, we receive images of a full NATO onslaught against the defenders of Sirte as freedom and democracy was imposed upon the citizens of Libya, we receive evidence of the Libyan terrorist NTC forces attacking a hospital, under the full cover of NATO. So vicious was the attack on the hospital in Sirte, by NATO's terrorists, that the Red Cross was unable to deliver supplies.

We receive evidence of NTC attacks against Red Cross personnel trying to get medical supplies into Sirte. Preventing access for aid is a war crime by the NTC and by NATO for strafing the positions of the authorities.

We receive evidence that NATO was using helicopters to fire missiles into Sirte, despite the fact that its mission was to impose a no-fly zone. Gaddafi was right: the UNO panders to the whims of the FUKUS-Axis (France, UK, US and Israel)and does not use the same weight and measure when dealing with smaller nations.

The terrorists in this case came from Misratah and strafed the refugees, chanting racist slogans. Why? Because many of the residents were Negroes from Tawergha, which was the victim of ethnic cleansing from the Misratah brigades. Let this be the legacy of NATO for humanity: it supported racists, it supported terrorists, it supported rapists and now, Libya is in chaos.

Let us ask Messrs. Cameron, Sarkozy, Obama, Hague, Juppé and Hillary "War Zone" Clinton if they are satisfied at what they have done.

The legacy of these demons is clear to see in Libya today, visible in the slogans painted along the roads: "the brigade [Misrata brigade] for purging slaves and black skin"; "drastic measures like banning Tawergha natives from ever working, living or sending their children to schools in Misrata."