The domino effect of Silvio Berlusconi

Italian Constitutional Court has recently held another hearing on the so-called "Ruby case" against the former Prime Minister Silvio Berlusconi, who was accused of molesting minors. The court decided to start a new process against him. 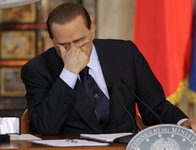 The decision to start the process was made in Milan in pre-trial proceedings. The prosecutor's office initially accused Berlusconi of being involved in the prostitution of minors, and then the abuse of power to hide the crime. At the time, the retired politician was accused of illegal wiretapping of political opponents.

Originally it was about his sexual relationship with an underage model from Morocco Karim El-Maruga, known by her stage name "Ruby." According to investigators, she participated in the parties at the famous Villa of the Prime Minister in Arcore when she was not yet 18 years old, and subsequently received gifts and cash rewards from the head of the Government.

Then Berlusconi was accused of the misuse of confidential information obtained through illegal wiretapping.

One cannot help but wonder: what is more important, and what was a front for distracting public opinion? It seems that the parties are insignificant, but the people of this Catholic country have a different opinion.

The person wiretapped was the head of the financial and insurance group Unipol Piero Fassino, a left-wing opposition leader, who was considered a key political opponent of Berlusconi. Don Silvio said that he had never listened to his private conversations. Nevertheless, the court decided to start the process number four.

It is an old story associated with the scandal surrounding the Italian insurance group Unipol of BNL bank (Banca Nazionale del Lavoro), where many officials and politicians were involved. Later BNL was bought by the French BNP Paribas.

The former Prime Minister was also accused of bribing lawyer David Mills. Only after that Berlusconi was accused in the "Ruby case." Another trial is open on fraud charges of the Premiere's company "Mediaset".

In connection with the new trial of the former Prime Minister, the Italians constantly discussed in pizzerias that Berlusconi himself became a regular participant of scandals associated with the publication in the media of transcripts of his telephone conversations. He was even forced to abandon the use of mobile phones, explaining it by the practice of listening to private conversations widespread in Italy.

This case of the former Prime Minister also involves his brother, Paolo Berlusconi, the publisher of the newspaper il Giornale. According to investigators, the brothers were involved in the publishing on the pages of this newspaper in Milan transcripts of telephone conversation between the head of Unipol Kosorte Giovanni and Piero Fassino mentioned above. The publication of the conversation appeared on the pages of the newspaper on December 31, 2005, despite the fact that it was protected by secrecy of investigation.

Hollywood celebrity George Clooney could be a witness in the scandalous "Ruby case". The lawyers of the politician asked him to confirm that the infamous "Bungah-Bunge" parties at the Villa Arcore were not indecent. Clooney was introduced to Silvio by his girlfriend, Elisabetta Canalis, an Italian model. According to some dancer she met this couple at a party. According to the defense, the actor can confirm that the party was within decency.

George Clooney, however, denied a close acquaintance with the controversial Prime Minister. According to him, he was extremely surprised by the invitation to the court in the case of Berlusconi. Clooney said the decision to call him to court was strange, since he met with Italian Prime Minister only once - when he tried to get help for an African country engulfed by a civil war. But Clooney's villa is located on the shores of Lake Como, near the prime minister's villa in Arcore, where he held the infamous spree.

The list of potential defense witnesses presented in the Office of the Tribunal of Milan featured another 76 people, including ministers, parliamentarians from Berlusconi's ruling party "The People of Freedom", as well as representatives of show business. The prosecution has more witnesses - 132 people, including those who attended the parties.

Prosecutors oppose the use of cameras at the trial because, in their opinion, it may affect the testimony. The main participant in the process Moroccan Ruby will have to testify twice. She was called as a witness by both the prosecution and the defense.

It is difficult to say how it will turn out, as a couple of months ago Karim became a mother. She now has a lovely daughter. According to the father of the baby both the mother and the newborn feel fine.

Happy father, 41-year-old Luke Rizzo, believes that his daughter is as beautiful as her mother.

Hopefully, the judge, prosecutors and lawyers will be able to find common ground. The first meeting of the new case is scheduled for March 15. However, given the fact that Berlusconi may face other charges, he will not have it easy.