Algeria is at risk of seriously damaging the relations with the countries of NATO. It would seem that in the past 20 years, this country has become a leading partner of the West in the fight against terrorism in North Africa. The events of the last year in Libya, in which Algeria nearly openly supported al-Gaddafi, have clearly shown that serious complications have emerged in the relations between the partners. 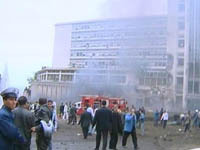 The Algerian leadership was repeatedly asked for an explanation with respect to the support of the Colonel. In November, after the death of Gaddafi the relations between the former partners in the fight against terrorism were marked with additional complications. Algeria banned the U.S. and France to carry out flights of unmanned aerial vehicles over its territory. This affected nearly all countries of the Sahel and infringed upon their sovereignty.

The Americans and the French tried to reason with the Algerian side that it was necessary in the fight against terrorism and the spread of weapons from Libya. However, the Algerian President Bouteflika has remained adamant, pointing out that Algeria was coping well with the terrorist threat.

However, in late January the UK and France issued a formal request on the need of stronger efforts in the fight against "Al Qaeda" in the Sahel. Algeria was required to first open its airspace to NATO aircraft, as well as provide the infrastructure for the territory and the Franco-British Special Forces, charged with tracking and elimination of local leaders of "Al-Qaeda."

The alliance did not request everything at once. Chief of AFRICOM (the regional unified military command of U.S. forces on the African continent), General Carter Ham, tried to negotiate with the chief of the Algerian General Staff Ahmed Salah Hyde the deployment of the U.S. drones on Algerian territory. The use of the latter resulted in the deaths of hundreds of civilians in Afghanistan, Pakistan and Yemen, and was one of the factors in the Pakistani-American relations. However, the reply was a resounding "no." It was given without excuses and vague promises that many of the leaders of Arab countries are known for.

Algerian credo is prevention of foreign forces in the region, fraught with the weakening of Algeria, under whose auspices the fight against the Islamists was led. Suffice it to point to the fact that neighboring countries albeit with reservations, but still recognize the primacy of the Algerian on this issue. This has to do with the fact that it has a much larger force than Mauritania, Mali and Niger combined.

More recently, a center for the exchange of information on terrorist activity in the region has been deployed in Tamanrasset (southern Algeria). The center also plans joint operations that the Americans and French are not always informed about.

The appointment in December of 2011 of General Tartaga Atman as the chief of the Algerian intelligence is noteworthy. He is opposed to close cooperation with Western intelligence agencies. Sources close to the general point to the fact that previous experience with them has not always been positive and that at times this led to the disruption of operations to neutralize a number of Islamist leaders.

The situation in the Sahel has markedly deteriorated since the overthrow of Gaddafi. Both "Al-Qaeda Maghreb" and Tuareg forces have received modern weapons from Libya in 2011, that later turned out in Mali and Niger. In January, the Tuareg have resumed their fight on Malian territory. The next step is the destabilization of the situation in Niger, where the West, mainly France, obtains a significant share of uranium. The excitement of Paris is understandable. The U.S. and French intelligence services jointly assess the situation in the region as "a big black hole", impossible to plug without Algeria.

Yet, the behavior of the Algerian leadership is understandable as it is seriously concerned that NATO under the pretext of fighting the radicals will prepare the ground if not for aggression, then for the support of "the Algerian democracy," a local version of the "Arab spring".

The situation is exacerbated by the intransigence of the Algerian leadership on energy issues. Despite his desire to bring additional foreign capital into the country, Bouteflika is not ready to let it in on the terms of investors and intends to maintain national control over the energy projects.

A war waged against Libya only reinforced the suspicions of Algeria. Bouteflika knows that the words of Western justice officials, who praised the Algerian leadership for representing a country at the forefront of the fight against terrorism in North Africa, were fair. Similarly, he remembers that in recent years Gaddafi was no less important partner for the West in a number of ways, including in the fight against terrorism.

However, we cannot rule out that this refusal will be used as an excuse for the West to start pressuring Algeria, whose actions are more often run counter to the wishes of the U.S. and its allies.