Heads of clans and tribes of Syria supporting the country's defense 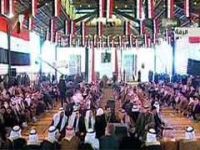 The heads of the clans and tribes of Syria gathered in assembly on Monday (30th) in Raqqa in the north of the country. They confirmed what is believed among the people, that they are facing a foreign conspiracy and expressed their support for the government.

Speaking on television, Sheikh Saleh Al-Nuemi, chief organizer of the forum, said that these communities, which generally live in rural areas particularly in the north, are aware of the need to defend national unity.

This assembly of wise and respected figures in Raqqa, the capital of the homonymous province, is not the first of its kind, as has already been done in a similar one carried out in Daraa in March of 2011.

Al-Nuemi indicated that the clans at that time played a reconciling role in calming the situation in this city as they always have in the past.

The Director of Islamic Affairs and Worship of Raqqa, Sheikh Abdullah Saleh, warned that an anti-Syrian campaign is being waged, attacking the entire Arab and Islamic nation. He described as unprecedented the media harassment based on offensive lies and falsehoods - which he denounced - in which some channels that claim to be religious manipulate and even use "fatwas" (Islamic decrees) calling for the spilling of Syrian blood.

Quoted by the news agency SANA, the writer, Najah Ibrahim, assured that this country has never known division, racism or sectarianism throughout its entire history, and called on intellectuals to confront the crisis inflicted on the country from abroad.

Syrian broadcast media today reported that the Conference of Arab Parties that was held last weekend in Amman, Jordan, condemned the Arab League for "being put alongside the nation's enemies to attack Syria and ignore the reality presented by the report of the observer mission."

"We see the resolutions of the Arab League as an encouragement to armed terrorist groups in Syria who perpetrate crimes against the civilian population and destroy the infrastructure," he said in a statement to the General Secretariat of the Conference.

With this negative attitude, the Arab League is complicit in the bloodshed and destruction, and serves the centers of interest that want to internationalize the crisis, denounced the forum.