Republic of Srpska: 20 years of struggle 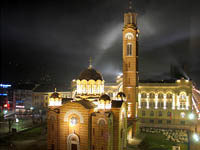 The beginning of this year marks the 20th anniversary of the establishment of the Republic of Srpska within Bosnia and Herzegovina. Its emergence was dictated by the realities of wars that began as a result of the collapse of former Yugoslavia. Everything pointed to the fact that this formation would not last long.

Orthodox Serbs are indigenous people of Bosnia just as Slavic Muslims (Bosniaks), Croats and Catholics. Before the Second World War, Serbs represented the largest number of ethnic groups in the Bosnian land. Subsequently the Socialist Republic of Bosnia-Herzegovina was established, acknowledged by the formation of three people: Muslims, Serbs and Croats. According to the census of 1991, the Serbs accounted for 31.4 percent of the population.

In 1991, Croatia and Slovenia were considering leaving Yugoslavia, followed by Macedonia. In Bosnia, the situation was not that straightforward. Muslims and Croats thought of separation (the former wanted to establish their own state, the latter - to accede to Croatia). The Serbs did not want to turn into aliens in their homeland and separate from Serbia that remained the "core" of Yugoslavia.

In the spring of 1991 in the current capital of the Republika Srpska, Banja Luka (in the north-west of Bosnia-Herzegovina), the establishment of the Serbian Autonomous Region of Bosnian Krajina was announced. In the fall of 1991, as well as in the beginning of 1992, a few other self-proclaimed Serbian republics emerged, mainly in eastern Bosnia near the border with Serbia.

On October 15, 1991 Muslims and Croats voted to secede from Yugoslavia. The Serbs boycotted the referendum. When in early 1992, the Bosnian Muslim leader Alija Izetbegovic demanded Belgrade to recognize Bosnia's independence, various Serb autonomies merged into the Republic of Serbian people of Bosnia and Herzegovina in Yugoslavia. In August of 1992, the present name - the Republic of Srpska - was announced.

In the spring of 1992 blood was spilt in Bosnia. The Serbs had to defend the right to life with arms. Then-President of Bosnia Izetbegovic dreamt of a united and indivisible Islamic Bosnia-Herzegovina. The notorious "Al Qaeda" marked its presence on Bosnian soil, killing local Serbs and Croats. Parts of the Yugoslav People's Army (JNA) left Bosnia in the spring of 1992. Serbia that was under the pressure of international sanctions could not help.

Under these circumstances, the people who were later wanted by the Hague tribunal for over 10 years came to the forefront. Psychiatrist and poet Radovan Karadzic was a political leader of Republika Srpska (RS), and General Ratko Mladic - a military. Gradually, a large part of Bosnia came under the control of the Serbs. RS was later to reunite with Serbia. However, things turned out differently.

The Bosnian Serbs were struck by all of diplomatic and military might of the West. Their positions were bombed by NATO aircraft on multiple occasions, Karadzic and Mladic had been wanted for years, and in 2008 and 2011, respectively, they were detained in Serbia and taken to the Hague Tribunal. Under pressure from the U.S. and the EU Belgrade stopped helping the Bosnian compatriots. As a result, by late 1995 they were forced to leave part of the occupied territory.

The Dayton Accords signed in late 1995 crowned the war. Bosnia and Herzegovina became a confederation in the Muslim-Croat Federation and Republika Srpska. The latter was prohibited from uniting with Serbia, but its autonomous status was retained. Under pressure from the West, it had to make many concessions to the central government in Sarajevo, but is still holding.

Vladimir Putyatin, a historian, balkanist with the Department of History of Southern and Western Slavs of the MSU History Department commented on the situation in the Republika Srpska and its prospects in an interview with "Pravda.Ru":

"In contrast to the Republic of Serbian Krajina (Croatia), Serbs in Bosnia and Herzegovina were able to defend their independence in the war of 1992-1995 using weapons, despite the international pressure at the final stage of the Bosnian war of 1992-1995.

Muslims and some Croats (e.g., former Croatian President Stipe Mesic) state that the RS was created largely due to the genocide of the Muslims, and therefore this state institution has no right to exist. Continuing the logical series, a unitary Muslim state (for the Muslims with the center in Sarajevo) should be created. However, neither the Bosnian Serbs, nor Croats want this.

17 years ago the Dayton Accords were signed, putting an end to the war in Bosnia. In the Serbian society of the time they were seen as a capitulation, but are now the real basis for the existence of the Republika Srpska. During this long period not only it had defended its independence, but also proved to be successful, as opposed to "big" Bosnia and Herzegovina, existing only by the will of the West.

An important role in this is the personality of President of the RS Milorad Dodik, who is perceived by the Bosnian Serbs as the most sensible politician defending the national interests to the end. Even under international pressure, Dodik was not only able to defend the republic's sovereignty in domestic affairs, but also conduct his own foreign policy. Bosnia and Herzegovina because of the strong position of Dodik still has not recognized the independence of Kosovo, unlike Montenegro and Macedonia.

At the same time strong economic relations with Russia are developing. "Zarubezhneft" undertook the modernization of the refinery in Brod. In November of 2011, negotiations were held on the establishment of a branch from the "South Stream" on the territory of the Republic. The level of the relations between the Republic of Srpska and Russia is immeasurably higher than the federal, due to the obstacles for the Russian business placed by Sarajevo.

Currently a question about the future of Bosnia and Herzegovina is raised at various levels. The country has the right to prove its existence on the basis of the Dayton Accords. However, the creation of a unitary state, the new Yugoslavia, is out of question as its very right to existence was destroyed by direct intervention of several countries in the 1990s.

Dodik is often accused of undermining the foundations of Bosnia and Herzegovina. However, the rights of Croats who had been forced upon the union with the Bosniaks (Muslims) are still not discussed. Sarajevo holds an obvious course for the Islamization of the region, which threatens not only Bosnia and Herzegovina, but also all the Balkans. This policy has led to the fact that the recent enemies - Serbs and Croats - see each other as allies in prevention of the creation of a unitary Islamic Bosnia and Herzegovina.

The Republika Srpska in the past 20 years has shown the world that following the policy of defending the national interests is the only way to preserve the sovereign state, even under the most adverse conditions. No real concessions in the present are worth the bright European future."