For the first time during his tenure as president of the U.S., President Barack Obama met with his Georgian counterpart Mikhail Saakashvili in the Oval Office of White House. The American host praised the guest, and set Georgia's democracy as an example to others. In response, Saakashvili glowed with delight. 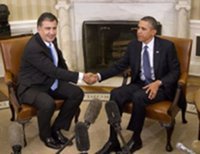 Obama said that he welcomed the model of democracy and transparency Georgia has established not only at home but also in the region. He expressed hope that if the progress remains in the next few years, many others would believe that if Georgia was able to hold such a transformation, others would be able to do is as well.

Then a "Freudian slip" followed: Obama in the heat of a passionate speech confused Georgia with Russia. "One of the first things that I did was to express my appreciation for the institution building that's been taking place in Russia," Obama declared, before quickly correcting himself. "Er, in Georgia..."

According to the American leader, the parties discussed ways of further strengthening the strong bilateral relations between the two countries, including the possibility of signing a free trade agreement. In addition, Obama emphasized that his country will continue to support Georgia's aspiration to join NATO.

Saakashvili was very pleased and literally glowed with joy. He said that the results of the meeting surpassed all his expectations. He added that he visited meetings in the Oval Office under the previous administration, but never before has left it with concrete results.

In addition, Saakashvili promised to give the Parliament more authority and hold honest elections. He promised to continue to cooperate with the Americans in all directions. He stated that nothing can divert Georgia from its path, and nothing would bring it back to a lesser democracy, as well as corrupt and outdated political system. This means that Georgian democracy cannot be built without the United States.

Saakashvili said that it was agreed that bilateral cooperation in the sphere of defense must rise to another level. He stressed the importance of Barack Obama saying that the U.S. will continue to support Georgia's integration into NATO. He welcomed free trade zone. "It will be very, very important step for the economy of Georgia," Georgian President said.

Georgia once again was declared a beacon of freedom, democracy and transparency for its neighbors. What could it be a model for? Perhaps, the fight against corruption. Saakashvili disbanded the traffic police known for bribery, and replaced at least 80 percent of the police staff. The extent of everyday corruption was indeed reduced. It became easier to register a company, and investment poured into the country.

But is that enough to qualify as "an example of freedom"? Dictator Augusto Pinochet in Chile, too, was able to initiate an economic breakthrough for his country. That did not stop him from creating a concentration camp at a stadium and shooting thousands of his opponents, and forcing tens of thousands into exile. Saakashvili, of course, is far from it, but the mysterious deaths of his opponents have taken place (think former Prime Minister Zurab Zhvania and businessman Badri Patarkatsishvili).

"Democracy of batons" was also clearly revealed to the world.  Very well paid by local standards police violently dispersed the opposition demonstrations with batons, tear gas and water cannons. This happened on November 7, 2007, February 27, 2009 and May 26, 2011. Many colleagues of Saakashvili have joined the opposition to such a "democracy" - former parliament speaker Nino Burjanadze, former ministers of defense and settlement of conflicts Irakli Okruashvili and Giorgi Khaindrava.

Today the avenging sword of Georgian democracy is directed against the businessman Bidzin (Boris) Ivanishvili. As soon as he announced his political ambitions last fall, he was found to be in possession of a "wrong" French passport and was stripped off his Georgian citizenship. Although he owned the passport of France for a few years, earlier for some reason it did not bother anyone.

"Respect" for the rights of national minorities in Georgia is a separate issue. Residents of South Ossetia were forced to live in Georgia by means of a war. Remembering how the Georgians for years oppressed the minorities, Abkhazia preferred to separate. Armenians complain about their situation as well. In particular, they are not satisfied with the seizure of their temples, and lack of Armenian language schools in Javakheti, where they constitute the majority. Azerbaijanis are dissatisfied with school policies as well.

Although a quarter of Georgia's population is non-Georgians, and some areas are dominated by ethnic minorities, they have no territorial autonomy. In the parliament, of 150 MPs two are Armenian and two Azerbaijanis. The government has one Russian minister and a man with an Ossetian last name. Ossetians remaining in Georgia are being assimilated. There are fewer than two percent of Russian, while 20 years ago there were more than six percent.

What can Saakashvili be proud of? Can he even be considered a democrat? Vladimir Zharikhin, deputy director of the Institute of CIS and Baltic countries commented on the situation for "Pravda.Ru."

"Saakashvili is an enemy of Russia, but we have to see his strong sides as well. We cannot smear him with black paint. Yes, he certainly is far from being a democrat, but in many ways he can be called an effective leader, and there is even something to learn from him. Take, for example, a radical reform of the security structures and governance. All this is not hindered by the fact that Georgia is at the service of an external sponsor. By the way, part of the budget of Georgia is the direct investment of the United States.

Problems with national minorities in Georgia do exist. Suffice it to recall the Armenians in Javakheti and Azeris in Marneuli. However, so far the situation is under control. There were no riots there, let's be objective.

Saakashvili is "one of their own," according to the classical formula of U.S. foreign policy. As long the US needs to use Georgian territory in the game against Iran, it will remain a "beacon of democracy." When the issue with Iran is solved (not necessarily in favor of the U.S.), Saakashvili will no longer be needed, and we might hear quite different things about him."