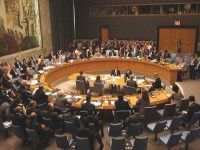 The UN Security Council on Tuesday again addresses the human rights situation in Syria, with a draft resolution proposed by Morocco, which calls for the ouster of Syrian President Bashar al-Assad. Russia has rejected this intrusion into the internal affairs of Syria.

As a permanent member with veto power, Russia, a traditional ally of Damascus, rejected the proposal because Russia believes that "not only does it cross our red line, which is an indication of the imposition of sanctions and an arms embargo, but includes unacceptable points, such as the idea of ​​imposing a certain outcome to political dialogue which has not even begun," said Vitaly Churkin, Russian ambassador.

A discussion of the Council, under the chairmanship of South Africa in January, will be joined by the Secretary of State of the United States, Hillary Clinton, and the foreign ministers of France, Alain Juppé, and the United Kingdom, William Hague, in a new attempt to find a solution to the more than ten months of violence in Syria, which has allegedly caused over 5,400 deaths.

The United States "supports the draft resolution submitted by Morocco and believes it is vital that the Council fully supports the proposals of the Arab League," said Ambassador Susan Rice today, according to reporters at the UN.

On the negotiating table of the highest decision organ of the UN is the Moroccan proposal that seeks to end violence in Syria and focuses on the "peace plan" proposed by the Arab League "to facilitate a political transition leading to a 'democratic' and pluralistic political system."

This last draft resolution was submitted last Friday by Morocco's ambassador to the UN, Mohamed Loulichki, and was written by Arabs, in collusion with Europeans, and supported by the United States.

U.S. Ambassador, Susan Rice, in declarations to the press at the United Nations, said that the "timing" of the adoption of the resolution, while stressing that its content "is fairly straightforward, there are no sanctions, no use of force or threat to use force."

The U.S. diplomat added that it is "a plan to support the Arab League. It's the least that the Council can do."

On the Russian opposition to the proposal, Rice said "the best thing would be unanimous support and that all support the plan of the Arab League," while noting that "ten terrible months of increasing violence of a government against its people have passed."

Rice, who avoided considering whether or not Syria is or is not in a scenario of civil war, said that at this time many members of the international community from the neighbors of Syria to the countries of the European Union (EU) and United States and now the Arab League are trying to "prevent a worse scenario. The alternative is more violence and that chaos is intensified."