Islamists dying for power in Holland

For the first time in the history of Europe, Islamic organization can participate in the elections. Party For Muslim Netherlands  wants to get into parliament in 2015. The Netherlands could become the first country on the continent where the Islamists will participate in the legislature. The far-right sentiment is increasing in the country as well. 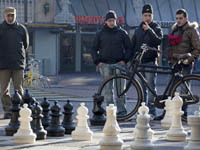 The party program leaves no doubt about its nature. Let's start with the fact that only Muslims can be members of the organization. Its aims are to fight against abortion, homosexuality, abuse of religion and religious texts and all kinds of discrimination. It proposed to prohibit all kinds of drugs, including recreational. The main authority in the Netherlands should be the Shura (Islamic council).

There are also no doubts with regard to foreign policy. Activists of the Party for Muslim Netherlands insist on the cessation of support for Israel, withdrawal of Dutch troops from Afghanistan and Iraq, an early admission of Turkey into the EU. Party members are promoting their ideas through the members of city councils of Amsterdam and Rotterdam. Many Muslims live in the major cities of Holland, so Party for Muslim Netherlands has enough voters.

Some of the demands of the organization are shared by the conservative Dutch (there are still some of those). Many residents of the country do not like the open sale of marijuana, gay marriage, and "red light" neighborhoods - in short, everything that made modern Netherlands famous. However, the topic of discrimination and harassment of religious texts is quite slippery. The indigenous people are unlikely to be thrilled with the idea of life under Sharia law under the authority of the Shura.

What are the chances that the Islamists will get into the parliament? The threshold for getting into the States General of the Netherlands is five percent. The number of adherents of Islam is approximately one million people (out of 16), or over six percent. It is not a given that all followers of Islam will vote for the Party For Muslim Netherlands. But even participation in the election of such an organization is a significant event. Never before has Islamist party "stormed" the parliament of a European country. And then, everything is possible: the birth rate in Muslim families is high. The time may soon come when the Islamists break through to the power.

What made one of the oldest democracies in the world talk about creating an Islamic Shura? The first meetings between Muslims and the Dutch occurred at the turn of 16th - 17th centuries. Then they began the conquest of vast Indonesia - a predominantly Muslim country. Some of its inhabitants were transported to South America, the Dutch colony of Suriname. After the Second World War, Indonesia gained independence. In the early 1960s, followers of Islam have appeared in Holland.

Fifty years ago, Europe was faced with a shortage of unskilled labor force. Many countries have decided to attract immigrants from Asia and Africa, and Holland was no exception. In 1970s, hundreds of thousands of Suriname residents, including Muslim immigrants from Indonesia, moved to the former colonial power. Later, Kurds, Afghans, Albanians, Bosnian Muslims, and immigrants from other Arab countries came to the Netherlands.

In the mid-1970s, the government began to subsidize the construction of mosques and prayer houses. As a result, there are over 400 mosques with minarets in the Netherlands today. Against the background of the fact that Christian churches are getting closed and emptied, the growing number of mosques is particularly impressive. Besides, immigrants from the mid-1970s have the right to establish schools with instruction in their native language. It is not hard to guess what was often taught in these schools. In recent years the autonomy of these schools was limited. However, nearly 30 private Islamic schools are still operating.

For many years the government encouraged the creation of Islamic organizations. In the 1990s, the Islamic Council of the Netherlands was created that included three largest Muslim communities in the country - Moroccan, Turkish and Indonesian-Surinamese. Then there were three other organizations. They are fighting for leadership of the flock. There are mosques not controlled by any one of them, and often these are the places that conduct radical Islamist propaganda.

In 2003, the Government of the Netherlands allowed the activities of the European Arab League. The head of the Dutch branch Jamil Jawad immediately declared that Israel must be destroyed. He demanded that the Netherlands recognizes the constitutional status of the Arabic and Turkish languages and Muslim holidays. In 2008, a native of Morocco, Ahmed Aboutaleb, became the mayor of Rotterdam. Although he did not participate in any Islamist propaganda, indigenous Dutch got scared.

They have good reasons to be frightened. In 2004, a native of Morocco born in Holland murdered filmmaker Theo van Gogh, who was filming a movie about the plight of women in the Muslim world. Two years earlier the leader of the "List Pim Fortayna" party Pim Fortayn, advocating for a total ban on immigration from Muslim countries, was murdered. Although the crime was committed by a native Dutch, its shadow still fell on the Muslim community.

In the upcoming in three years parliamentary elections the main opponent of Islamists will be the Party for Freedom, led by Geert Wilders. The Party received nine seats in the States-General for the first time in 2006. Four years later, over 15 percent of the Dutch voted for it, and today it has 24 seats in the parliament. In many respects it was the law proposed by this party that banned headscarves in schools.

Wilders was not particularly shy talking about the Muslims. There are moderate Muslims and many Muslims in the West are law-abiding citizens. But there is no such thing as "moderate Islam. "Islam is a totalitarian ideology. I would have kicked the Prophet Muhammad from the country, if he had lived in our time." "I say - stop Muslim immigration immediately. If we do not stop immigration because of political correctness, we will lose Europe." This attitude finds increasingly more supporters.

The Muslim community (and others) more than once tried to bring Wilders to trial. First time it happened in 2008 for his film "Fitna", where the politician compared Islam to Nazism, and the Koran with "Mein Kampf" by Adolf Hitler. There was no appropriate article in the Criminal Code. A year later, a new process was started where Wilders was accused of inciting ethnic hatred. The trial continued for 18 months, but eventually he was acquitted.

"Multiculturalism has failed. The Dutch no longer feel at home in their own country," said last year a far more moderate Vice-Premier of Netherlands Maxime Verhagen. The existence of an openly Islamist party on the political sky of Holland once again confirms this. If it gets even three percent of the vote and does not get into the Parliament, it will be a great success and the most serious warning to the Dutch society.

Certainly, the participation of the Party For Muslim Netherlands in the election will add votes for Wilders and his Party for Freedom. Other parties also began voicing "right" statements. The prospect of living under the authority of the Shura does not appeal to either conservatives or liberals, or socialists, or "green." Strictly speaking, this process is already underway. Some immigrants from Muslim countries, too, are unwilling to live under sharia law. Hundreds of thousands of them have been fully integrated into the Dutch society.

One way or another, but the specter Islam is looming over the Dutch.