Syria: The whole truth. Game on!

What is going on in the Middle East is the beginning of something far bigger. It stretches from the shores of California to the coastline of Kamchatka, engulfing the Satanic hordes of NATO, in turn controlled by the gray and sinister cliques which gravitate around the White House. The fetid breath of world war three whispers in our ears. Read on... 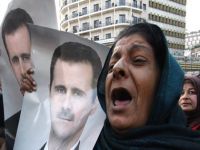 And today? Today we have the fallout resulting from a Soviet Union which decided to divorce amicably, as per the Soviet Constitution. Most States did so legally, Georgia did not. Azerbaijan did not. And today we have a festering and monumental problem arising out of the imbalance created by the voluntary dissolution of the USSR and the arrogance of a former foe which claims to be the victor, without ever having entered into battle. What the FUKUS-Axis forgets is that the result of a military incursion against the USSR would have engendered a massive response. Replay Georgia. Who won and who lost?

Well, maybe it is now that we shall see, calling the bluff of the Satanic Hordes of NATO and the FUKUS Axis. And we shall see where the hearts and minds of the international community lie.

The game, ladies and gentlemen, is on. It has nothing whatsoever to do with ethics or morality - in Saudi Arabia a woman can be stoned to death because she is raped and the USA and FUKUS-Axis shake hands with the sheikhs, dine with them and allow them access to the delights of their cities without stealing their money, as they did with Libya.

And Syria is the first square in this game. Let us examine the interview of political analyst Dr. Taleb Ibrahim with Al Manar TV on 2012/01/23. In this interview, Dr. Ibrahim exposed what is going on, namely:

And here comes the bombshell:

"Yes, there is an internal issue, and there are internal motives, but the foreign factor played the main role in this crisis, but when we talk about a international dimension and that this crisis is already internationalized, then what does it mean that the French intelligence training members for street wars and using Israeli made "Inerka" missiles, and the advanced fighting in Wadi Khaled.

"What does it mean that Erdogan and his intelligence and NATO intelligence training and fund camps for Syrian armed men under the title of humanitarian refugees in Turkey and Eskanderon district, and what does it mean (it is news that we are mentioning on Al Manar TV and we hope it receives the adequate concern) what does it mean to move large part of the Libyan chemical weapons arsenal to the Turkish territories, to the hands of insurgents, and along with it they brought Libyan fighters to Syria, and by the way, some Libyan fighters were killed on the Syrian soils...

"So there are preparations for a very dangerous and big event, and when Davutoglu arrived in Lebanon (as we heard from some Lebanese sources) he said: "expect a big event at the end of this month in Syria, or a dramatic change", but I expect for these gangs to be granted permission to start their work, and perhaps use the chemical weapon, and when they use the chemical weapon, they might attempt to accuse the Syrian government, and we start a new scenario, similar to the Iraqi scenario or the Libyan one, the problem now is that the Arab world and the Arab League, lead by Qatar, are not part of the crisis and not part of the solution, as Addabi's report and statement are clear , and by the way, Addabi's statement contradicts with the statement of the AL secretary general, as the latter said that the extreme violence used by the government led to the other violence, Addabi said clearly, there are armed groups that attack the Syrian forces and which force them to respond, and Addabi said there is no direct clash and there is no direct fraction, and that the violence percentage had dropped, and the solution is by an instant dialogue between the Syrian leadership and the opposition................."

In summary, the west is going to use a false flag operation, as it did in Iraq and Libya, to invade Syria. In the forthcoming days they plan to announce that the Syrian government has used chemical weapons against the NATO-Satanic terrorists to justify a war, just as they are preparing a false flag event to incriminate Iran.

Let us all be watchful. The FUKUS-Axis has the credibility of a heroin addict in withdrawal and has done the same to the international community that the NATO-backed heroin producers in Afghanistan have done to our children.