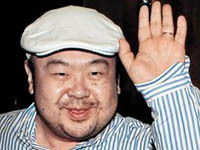 The regime under new leader Kim Jong-un will soon collapse. This apocalyptic prediction was made by his half-brother, Kim Jong-nam, now living in the former Portuguese colony of Macao in southern China. Meanwhile, North Korea is strengthening its border with China. According to some sources, this is done to reduce the flow of those who want to flee the country.

A true information bomb was blown up by the eldest son of "Dear Leader" Kim Jong Il - Kim Jong-nam. In Tokyo, a book by journalist of a Japanese newspaper Tokyo Yoji Gomi was published based on interviews with Kim Jong-nam. The eldest son of Kim Jong Il was pictured as a real maverick, supporter of western democracy and an opponent of the "communist monarchy." He predicted that his brother Kim Jong-un and North Korea as a whole will experience a complete collapse.

In his correspondence with the Japanese journalist he said that the regime of Kim Jong-un will not last long. North Korea will collapse with or without reforms. He expressed his concerns with the ability of Kim Jong-un, whom he likened to his grandfather (the founder Kim Il Sung. - Ed. ) to meet the needs of North Koreans. He said that Kim Jong-un is just a figurehead, and all members of the ruling elite will have real power.

The eldest son of Kim Jong Il is also opposed to the transfer of power by inheritance. He said that the Chinese government, for example, only recognizes the heir for the sake of internal stability in North Korea. The transfer of power in the third generation is a mockery to the entire world. Being of sound mind, it is hard to imagine that the process of a full transfer of power happened for the third time, and Kim Jong-un will become a true ruler of North Korea. It is hard to believe that absolute power, which was forged in the country for many years, can pass into the hands of the young ruler who had been trained for this role only for two years, said Kim Jong-nam.

Responding to the question why his father decided not to hand over power to him, Kim Jong-nam said: "Because I have recommended my father reforms and policy of transparency." "When I had an opportunity, I would give advice to my father. I told him about the concerns of the international community with regard to our nuclear tests and missile launches," he added. He looks like a peacekeeper dissident who was too dangerous transfer power toю

Then Kim Jong-nam acknowledged that the Western values ​​"corrupted" him. "My father sent me to study abroad, I was very lonely. Then, my younger brothers and sister were born from another mother, and my father's love was leaning in their direction. Due to many years of studying abroad I have turned into a capitalist guy, which caused my father to cut the time his other children spent in schools abroad," he said.

A member of the Politburo of the Workers' Party of Korea (WPK) Yang Hyong had to comment on the revelation of the unruly son. In an interview with American news agency Associated Press that recently opened an office in Pyongyang he said that in the last several years, Kim Jong-un was close to his father. He helped Kim Jong Il to make key decisions in military and economic fields. Memorable bombardment of the South Korean island Enphendo in late 2010 was allegedly planned by Kim Jong-un.

As if in defiance to his elder brother who arrived to Macau, reports came from Pyongyang that "letters of fidelity to Comrade Kim Jong-un are coming from all over the country to Pyongyang. Officials, officers and soldiers, workers of large enterprises, builders of Hichhon HES, and members of youth construction brigades unanimously expressed their "devotion" to the new head of the DPRK, and willingness to follow him along the specified path, regardless of world events.

Village workers have promised to demonstrate high revolutionary enthusiasm and patriotism in order to solve the problem of supplying the population with food under the guidance of dear and respected Kim Jong-un. Scientists have made a commitment to head the Industrial Revolution, to introduce the latest in manufacturing technology. Employees of unions and women's organizations, judging from the letters, are ready to make every effort to ensure that Koreans are more closely united around Kim Jong-un.

Students of leading universities vowed "to actively support the Songun politics (military-oriented policy of the DPRK leadership- Ed.). Many young people have decided to voluntarily join the ranks of the Korean People's Army. Finally, Kim Jong-un was dedicated a song with a title "We will give our lives for our General Kim Jong-un." "Rodong Sinmun" newspaper published a poem called "The People! General Kim Jong-un is with us!"

Whether this is a reality or propaganda is anyone's guess. South Korean media state that in recent years the number of people who want to escape from North Korea has significantly increased. Last year alone nearly three thousand people fled from North Korea. Many of them arrived to the South through the Chinese territory. For this reason the Korean People's Army soldiers are strengthening the fences on the Chinese border. There is no accurate information on whether Pyongyang intends not to create a continuous fence along the border with China.

How true is the prophecy of Kim Jong Nam about the imminent collapse of the regime? On the one hand, anything is possible. The country experiences hunger now and then. Witnesses say that people besiege Chinese trains in the hope to barter something. On the other, the apocalyptic predictions about the imminent fall of the DPRK is made a few times a year, but so far Kim Jong-un had inherited power from his father. It is not ruled out that Kim Jong-nam was moved by simple jealousy.

At the same time, Kim Jong-un will not have it easy. He has to maintain the power, keep and strengthen the army, raise the economy, and maintain relations with his neighbors at least at a satisfactory level. The task is not that simple, given that the new leader of North Korea is the youngest head of state in the world who clearly lacks experience. But the experience can be acquired if Kim Jong-un chooses not to fully trust his entourage environment and listen to nothing but praises.

Read the orirignal in Russian