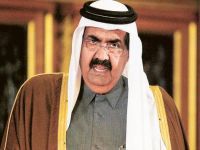 Less than a year ago, an attempted coup took place in the Sheikdom of Qatar by a disgruntled coterie that consisted of some military officers who wanted to dispose of the present ruler from the Al-Thani family who himself came to power in a bloodless coup that got rid of the elder Al-Thani who was at that time enjoying some fresh European air in the Alps.

It was bloodless coup by the present Sheikh who nevertheless has bloodied his hands by his illegal involvement in the recent decimation of Libya. He has now offered his hands again to the ill-fitting gloves of the western imperialist powers that plan to intervene militarily in the country of Syria that is witnessing unrest instigated and promoted by the same imperialists.

The Arab League consists of countries such as Qatar, Saudi Arabia, Kuwait, UAE etc. that have monarchies in power that have total support of the US, UK &=and few other western countries. Needless to say, without the support of these imperial thugs, the Sheikhdoms are sitting on powder-kegs that can explode at any time since their power base is weak by themselves, but are held on by sheer coercion.

The unrest that is going on in Bahrain and the attempted coup in Qatar are two examples of the state of affairs in these Sheikdoms. Most of them don't even have a hint of the "democracy" that is so dear to our western friends who desperately attempted to enforce the same in Iraq and Libya.

In Libya, they did this by sending incessant explosive messages of democracy from 30,000 feet for months that killed over 60,000 men, women and children. Iraq is another story in which almost a million people are dead, but the oil is flowing through the pipelines made and controlled by the imperial powers.

It is obvious why these Sheikdoms have joined the western nexus of imperial powers. Without this support, they can collapse like a house of cards. Countries like Iraq, Syria and Libya which had gotten rid of despotic monarchical rule were a threat to these Sheikhs and their hold of power. In true sense, these countries that had no more Royals at the helm were seen as a threat to the imperial hegemonic ideas of the western nations and their thirst for oil.

Whereas the Sheikhs and their fiefdoms have offered all possible services to their imperialist masters by providing military bases, cheap oil and finally, as in the case of Libya, manpower a.k.a. a mercenary force by Qatar to fulfil the wishes of an illegal invasion.

The same service is now being offered by this thug, Al-Thani, to the US, by prompting US led NATO to start the bombardment and get rid of Basher Assad, who by his policies has made Syria a modern State where women enjoy equal freedom unlike their counterparts in these Sheikdoms of Qatar, Saudi Arabia, etc. Libya and Iraq, too, had offered women an equal role in their societies by providing them education, jobs, etc. which again are lacking in these despotic Sheikdoms which are ruled by a bunch of subservient Sheikhs whose duties are to abide by the diktats of the West.

It is apparent that modernity in the Arab World is not tolerated by the western imperial powers. Their pseudo push for democracy is a gimmick. The quest for oil and gas and the access to the same is all they want. These Sheikhdoms are providing that without a question.

The problem was or is the more enlightened leadership in this region that with threats of nationalising their oil wealth, the possibility of a cut off to accessing the much needed energy source could or would become a reality. Hence these illegal attacks and invasions by the ex-colonialists on certain sovereign nations have taken place.

Their tactics and reasons are much masked by the controlled media of the imperialist west, most media owned by large corporations who have high stakes in the energy sectors. To put it bluntly, most media in the West lie about the true state of affairs in the regions of the Middle East and North Africa. It is the modern version of Goebells at work. Murdoch and the gang are the new 'Avatar' of Goebells!

Notwithstanding the joint veto by Russia and China at the UN Security Council on the resolution on Syria, if the imperial west overrides the same with impunity, as they have shown in the past, an attack on Syria by US led NATO will result in mass casualties and destruction of a country.

In the not too distant past, the southern part of the Americas had a number of countries, small and medium sized, called 'Banana Republics.' They were ruled by despots who directly came under the rule of thumb of the US. They were made to sway to the tune played in Washington by big business houses who had ownership of immense tracts of land in these countries. But now times have changed and the scene is now being shifted to the Middle East and Africa.

With the same ruthlessness, tied along with lies, the attacks, invasions and installations of puppet regimes have begun. Of course black gold is more precious than a bunch of bananas!

The question is this. How long will these new 'colonies-by-default' or the new 'banana republics' in the Middle East and North Africa remain under the cudgel and yoke of western imperialist masters?

If not for long, hopefully speaking, are these western masters living in an imaginary wonderland where all things are hunky-dory or are they so mentally imbalanced not to realise, after all, it will turn out to be a "fool's paradise" once the locals reclaim their land, power and wealth from the occupier?