NATO used its forces to the maximum to take Tripoli 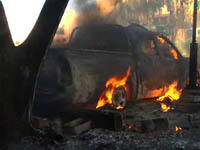 Italy's L'Espresso daily publication wrote that NATO's special forces played the key role when taking Tripoli, the capital of Libya. A participant of the operation shared his impressions with the publication. According to the author of the article, the man, whose story the newspaper published, was struggling with the butchers of Muammar Gaddafi, foreign snipers and killers, who had come to Libya from all over the world. According to him, all of them came to Tripoli to make money by aiming their guns at rebellious people.

The man, who introduced himself as a member of the Italian special forces, said that the secret weapon had been aimed against inexperienced rebels for months. "Those snipers stopped the first groups of the rebels, who entered the Libyan capital," the man said.

The author of the article admitted that bombs and missiles were useless against them. The residents of Tripoli did not struggle with them to avoid massacre in return. "There was only one way to remove them - to challenge them to a duel: a shooter vs. a shooter. This is exactly what NATO did. They gathered best snipers of the alliance under the conditions of extreme secrecy and brought them to Libya to get rid of the regime there. It was their weapons that contributed most to the fall of the dictatorship. It was them who opened the road for the rebellion. There were Italian servicemen among them too," the article said.

L'Espresso published the story told by Ale - a serviceman of the special forces of the Italian navy, who supposedly took part in the taking of Tripoli. According to the author of the article, Ale and his partners were working in the south-east of Tripoli. The men were equipped with Ar 15 guns with silencers of the new generation and state-of-the-art sniper rifles for high-precision gunfire for the distance of up to a thousand meters. Their equipment also included comfortable shoes and clothing: body armor with extra protection on the chest, cartridges, containers for water, medications and medical equipment neatly packed in the uniforms, etc.

"When Ale and his men arrived to the front, they took perfect positions. They could control the whole square from the height that they had taken. The snipers had to be removed before daybreak. Ale's men had already detected two enemy snipers with the help of electronic devices. Ale determined the target and said that he was ready. The enemies were quiet. They would make several shots before changing positions. That was a lethal mistake for them to make. The night was drawing to its end. It was time to move to another bunker of Gaddafi's supporters to open the door for the revolution wider."

Stories like these make one think about the real participation of NATO troops in the Libyan war. According to the official information from the alliance, NATO conducted bombings, restricted arms shipments, and assisted in training the forces who were struggling against Gaddafi's troops.

There is also unofficial information, which was exposed by the British media. According to British publications, Britain, for instance, went far beyond the framework set by the UN. The country supposedly participated in at least restricted operations in which it suffered considerable losses.

The above-mentioned article in the Italian newspaper also said that Ale was a member of the special team in which there was also a French legionary, a Briton from SAS and two US marines. All of them were veterans, whose skills were far better than that of Gaddafi's mercenaries.

According to the author, the use of those snipers became a critical element like a nuclear bomb in 1945, which changed the course of the conflict.

NATO sources said that there were as many as 4,000 US marines deployed near the Libyan shores during the operation. White House officials say that those marines did not take part in the Libyan "revolution." Was it really so?

It is worthy of note that there were reports saying that Gaddafi's soldiers downed helicopters with NATO commandos on board. It was also reported that the Libyan army had captured European mercenaries during the standoff.

The West uses professionals against unwanted regimes. However, the above-mentioned stories also mean that the West is ready to use its pros against other regimes as well - in Syria, Iran, etc. Foreign special services reportedly continue to sound out the possibilities for the Libyan scenario to repeat in Syria. There are also reports saying that mysterious snipers attack demonstrators and policemen to provoke armed clashes. Will Teheran and Damascus be able to set anything against mercenaries and commandoes who are capable of changing the course of any conflict?