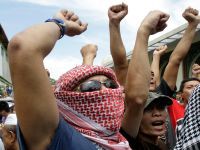 2012. Two thousand and twelve years after the birth of Christ, at the beginning of the Third Millennium, our international community is divided between those who uphold the international law and speak about it - and the FUKUS-Axis which flouts it at will, perpetrating acts of murder and terrorism.

Iraq provided a telling preview of what was to come - the wanton breach of international treaties, charters, covenants, resolutions and promises, the targeting of civilian structures with military hardware to then dole out rebuilding contracts, the purposeful theft of resources and historical artefacts, the opening of the concentration camps and the holding of detainees without due legal process, the torture, the sodomy, the urinating in food, the urinating on prisoners... these demonic acts - not one-off breaches by rogue elements but rather, an integral part of policy (water boarding, for instance) - alerted some of us as to the true nature of the FUKUS-Axis (France, UK, US and Israel) and showed us quite how low they can stoop.

They justify these murderous terrorist acts claiming that Iran is making a nuclear bomb, even though Mohammed el-Baradei, of the IAEA, refutes this claim saying the accusations against Iran are exaggerated. The ones who have the bombs are the FUKUS-Axis, including Israel.

Apart from bringing the world ever closer to the brink of a nuclear holocaust, the FUKUS-Axis has also caused hundreds of thousands of murders across the globe with its intrusive policies of greed, using NATO as the bulldozer as the Axis steals the resources of sovereign nations and destabilises societies to breaking point.

What, for example, was Libya doing to its neighbours? What threat was Libya posing anyone? If Colonel Gaddafi was such a tyrant then why was the UNO planning to award him a humanitarian prize in 2011? Why did NATO (the armed wing of the FUKUS-Axis) not allow the Libyan Jamahiriya government to hold a free and fair democratic vote? Because Colonel Gaddafi would have won with a vast majority over the terrorist hordes of rapists, racists, murderers, torturers, looters, arsonists and thieves that the FUKUS-Axis unleashed.

The FUKUS-Axis stands for murder, breach of the law, torture, terrorist acts and the support of terrorists against the forces of law. The result of this criminal intervention in Libya has been documented here and will be documented further in recent days. The situation is chaotic, the situation is dire, the country is in turmoil, the RAT/NATO terrorists are hated and the FUKUS-Axis has dug a deep hole into which it will have to pour billions upon billions of its taxpayers' money or else retreat in humiliating defeat.

This is the two-tier international community in which we live - a bunch of criminals and those who look on and mutter things about respect for the law. How sickened I feel to belong to the human species at this moment in time.