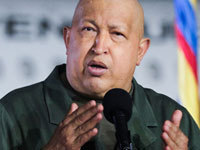 Over 18 months period four progressive leaders of Latin America and their fellow citizens were shocked by the diagnosis delivered by their physicians - cancer. Fernando Lugo, Luis Inacio Lula da Silva, Hugo Chavez, and recently Cristina Fernandez de Kirchner were given this diagnosis. The Presidents of Paraguay, Brazil, Venezuela and Argentina suspiciously simultaneously turned out on the verge of survival.

Chavez immediately warned that the disease may be a "new weapon of the empire to eliminate unwanted leaders." Maybe, but oddly enough, the result was the opposite. All politicians not only did not stop their political life and moved away from responsibilities, but on the contrary, dramatically increased their rating and rallied around the supporters.

First, in August of 2010 60-year-old Paraguayan President Fernando Lugo was diagnosed with a tumor of lymphatic system. After six sessions of chemotherapy in Sao Paulo and Asuncion, doctors reported that the tumor was gone. He was elected in 2008 with a mandate for five years. He resigned his ecclesiastical rank and became the second leftist president in the history of the country.

66-year-old former Brazilian President Luiz Inacio Lula da Silva was diagnosed with larynx cancer in October of 2011, nine months after the transfer of power to Dilma Russef. The doctors did not operate on Lulu, saying that as a result he may lose his voice forever - an extremely important tool for policy and communication.

They argue that after several sessions of chemotherapy the tumor of the ex-president who had a firm intention to return to politics was reduced by 75 percent. Lula, who was in power from 2003 to 2010, reduced poverty in the country, united Latin America and made Brazil one of the world's largest economies.

57-year-old Venezuelan President Hugo Chavez began treatment for cancer at the end of June of 2011. There is still no official data on what type of cancer he has. He was operated in Havana on July 20. After four rounds of chemotherapy, a series of medical tests confirmed a positive trend. Chavez has been in power since 1999 and in October of 2012 he is to run for the third term.

Finally, in late December, the media reported that 58-year-old Argentine President Cristina Kirchner will undergo surgery in early January of 2012 for cancer of the thyroid gland and the prognosis for recovery is quite favorable. Kirchner was re-elected for the second term in December of 2011 and takes a firm anti-American stance.

Hugo Chavez was the first to become suspicious. "I am far from delusions of persecution, but the fact remains - the murder as a way of removing unwanted politicians has been always practiced by the Empire (USA). I ​​have no proof, and yet it is obvious that there is something strange with progressive politicians in Latin America," said Chavez.

He is right, as murder of Fidel Castro was attempted in dozens of ways. Venezuelan writer Luis Brito Garcia counted more than 900 assassination attempts of the Cuban leader organized by the CIA. However, today Latin America is not only united against the USA, but also against Israel, where nearly all the countries recognize the independence of Palestine, so in fact one can search for trace not only of the CIA, but Mossad as well. It is also strange that Chavez's illness and the type of cancer (prostate cancer) was first reported by "a source at the CIA," a newspaper that exists on the money of the State Department - Nuevo Herald.

Is cancer a side effect of new weapons used by the intelligence? Or is it just a coincidence that is successfully intertwined with the "modus vivendi" of the agonizing North American giant? There are several prerequisites for the conspiracy theory. First, there is an obvious one - to prevent the development of South American socialism. Second, methods of operation have been developed, and the most unsuccessful ones are discussed by the entire world. Third, there is a sound scientific basis to invent new kinds of biological, chemical and electronic weapons tested in local wars.

Note that only those whose policies contradict the dominant position of the United States develop the disease. Then remember the "failures". First of all, the strange death of former President of Palestine Yasser Arafat who was suffering from leukemia in 2004. At the conclusion of French experts, he died of a massive brain hemorrhage caused by a disorder of the blood supply, which was provoked, in turn, by an unspecified infection. In the patient's blood platelet count was low and content of white blood cells was high. Similar symptoms may be signs of various diseases, including cancer, inflammation of the lungs and some blood disorders.

Then the mysterious murder of Alexander Litvinenko who died in London in 2006 as a result of a chemical poisoning with polonium-210. Which special services have done this is not known, but he died instantly from a progressive form of cancer afflicting vital organs. Another typical case is poisoning of the former Ukrainian President Viktor Yushchenko with dioxin of high purity, which was produced in the laboratory outside of Russia. Incidentally, this poison causes cancer of nasal and respiratory tract.

Also note that during the invasion in Iraq and Afghanistan, the U.S. tested a number of new weapons. For example, microwave guns that operate according to the principle of conventional microwave oven, but its waves are directed into a narrow beam, and the range of action is much wider. In addition to cancerous effect they have another one, no less terrible. They heat the water contained in the skin cells and the intercellular space. It cannot kill humans, but causes great pain, similar to that from burns. The symptoms are very similar to the symptoms of a heart attack from which president Nestor Kirchner died suddenly on the eve of the nomination.

WikiLeaks reported that in 2008 the CIA asked its embassy in Paraguay (Fernando Lugo!) to collect all biometric data, including the DNA of all four presidential candidates. Knowing the DNA code, it is easy to develop an oncogene for each individual. If we assume that such data was obtained on the eve of the elections in Brazil, then cancer of Dilma Russef in 2009 fits into this theory.

Having partially lost its influence in Latin America, the U.S. may have found a much easier and cheaper way to get rid of unwanted "partners." Over time alpha radiation, electromagnetic waves, or chemicals cause emergence and development of cancer. Using the experience gained, the CIA tested new weapons on the progressive leaders and revolutionaries of Latin America.

The U.S. economy is experiencing a crash no different than that of Greece, and it remains afloat only because it can turn on the money printing machine. Yet, the State Department cannot afford to dominate everywhere by military force, which requires great amounts of money to maintain. Therefore, it is logical to assume that they found new quick and inexpensive methods for the effective destruction of enemies. The most important advantage of these methods is that they leave no traces, disguised as oncology or a heart attack and eliminate the possibility of direct exposure and liability.