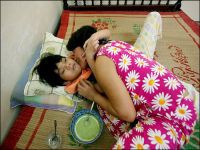 Agent Orange: Cursed legacy of the U.S. in Vietnam afflicts the 3rd generation of victims...a cowardly act of devastation in the account of U.S. history. There will be no compensation?

Devastated by a confrontation that lasted nearly 20 years, Vietnam has seen its population in the marks of a most remarkable of wars in the last century. The conflict, fought by the United States, left 2,300,000 missing and invalid. The 83 million liters of Agent Orange - highly toxic herbicides - dumped by Washington over thousands of hectares of Southeast Asia, is already in the third generation of those in the country affected.

With the objective to debate the consequences of Agent Orange left over for decades in the population of Vietnam, between the next 7th to the 10th of August, the 2nd International Conference of Victims of Agent Orange will take place, and Brasil will be represented by the Brazilian Center of Solidarity to the Peoples, Struggle for Peace (Cebrapaz) and the World Peace Council (WPC).

According to the President of Cebrapaz and WPC, Socorro Gomes, movements around the world will gather to demand that the UN declare itself in favor of compensation for the victims. "We want compensation for damage caused. Those responsible must be identified and punished for the crime committed during the war and is still being perpetuated to this day," she affirms

According to estimates, Washington launched the chemical on more than 25,000 kilometers of Southeast Asia. Known as Agent Orange, the liquid contained great quantities of dioxin, a carcinogen that caused disease and disability in both soldiers and civilians. Currently, more than two million Vietnamese suffer the effects of this contamination in their body.

Socorro recalls that "Entire families were affected. It was a criminal action, a genocide against the Vietnamese people. There was a genetic mutation that caused various types of cancer, skin diseases, lung cancer and mental disabilities, among other anomalies," she recalls. "Even today thousands of people continue to suffer these consequences. Children and grandchildren of the victims were affected by the changes," she remembers.

Without responsibility - No liability

Movements and Vietnamese associations bring charges in the United States for a redress and compensation for the damages of the war. The White House, however, denies liability in the case and assigns the harm to the product manufacturers. In 2004, victims' associations in Vietnam and the United States filed a lawsuit in federal court in New York against 36 companies that supplied the herbicide. The petition was denied in the first instance, by Judge Jack Weinstein.

For the president of Cebrapaz, "we did not win in the American court because it would cause a precedent for cases in other countries where the product was also released" - with the former Yugoslavia, Afghanistan and Iraq.

"Humanity cannot forget it. This was one of the crimes for which the United States has never been tried, as well as the bombs dropped on Hiroshima and Nagasaki. And doctors consider the current compensation of $18 offered by the United States absolutely insufficient to maintain the victims," she emphasizes.

Many victims' associations survive, according to Socorro, thanks to state support. "The families have nowhere to turn, therefore, the associations maintain schools, hospitals and shelters for children," she says. "The state is seeking to rebuild the country and the big challenge is to achieve social and economic development, reducing poverty in the countryside," she says.

Besides the debate about the consequences of the chemical still present in the life of the population, Socorro points out that Cebrapaz will have to use the Conference to discuss the elimination of chemical weapons use in conflicts.

On the last day of August, three people died in Vietnam due to the explosion of a bomb from the time of the war with the United States in the center of the country. The incident occurred on Saturday, in Binh Chau province of Quang Ngai, after three peasants found a 105 millimeter artillery shell, said the local chief of police, Tieu Viet Thanh.

The bomb exploded when the three men, between 51 and 57 years of age, tried to dismantle the bomb with a saw to sell the scrap metal. Two of them died in the act, and the third soon after he was taken to the hospital, police said.

Since the war ended in 1975, because of the abandoned bombs, about 40,000 Vietnamese were killed, a third part of them seeking to defuse bombs and sell the metal. Nearly15 million tons of bombs were dropped during the war, of which 10% failed to detonate, according to the organization, Renew, dedicated to the deactivation of explosives.