Japan to deliver arms to communist and sanctioned regimes 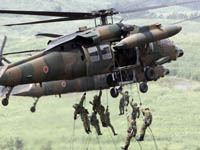 The Government of Japan on December 27 made a significant step toward the abolition of voluntary restrictions on arms exports that had been in effect since 1967. The Japanese news agency Kyodo reported that the decision was taken by the government's Security Council, based on national needs in developing their own military-industrial complex and intent to ensure adequate supplies of "military equipment for humanitarian missions." It is worth noting that the information did not come as a surprise, because in recent years, the Japanese side has repeatedly made it clear that such a step was possible.

Japan committed not to supply weapons to communist regimes and the countries involved in international conflicts and those placed under UN sanctions. This resulted in a serious blow to the Tokyo programs involved in the design and manufacture of weapons, as Japan had to refuse to participate in joint projects on military-technical cooperation with a number of states.

Of course, today's decision could not be made without the American ally knowing about it, and it is beneficial for them. For example, the abandonment of the old restrictions will allow the corporation Mitsubishi Heavy to participate in the production of parts for the fifth-generation fighter F-35 together with the U.S. company Lockheed Martin. A week earlier the official Tokyo endorsed the decision that the Japanese Self-Defense Forces will be equipped with these fighters. The estimated cost of the order of Tokyo is seven billion dollars. Moreover, Japan's participation in this project, according to experts, should significantly reduce the cost of the fighter.

Of course, another "militarized" decision of the Japanese government will remain unnoticed by neither the world in general, nor the region in particular. First of all, we are talking about China. They have repeatedly expressed concern about the steps made by Tokyo, clearly aimed at the departure from the post-war settings. Beijing does not hide the fear of the revival of Japanese militarism and revanchism and makes it clear that it will respond to the growing "military threat" with an additional increase in defense spending.

The Japanese side gave many reasons for this in recent years. They include limited participation in the "peacekeeping" and humanitarian missions of Japanese soldiers outside the region, as well as a significant strengthening of the Japanese Self-Defense Forces, and others.

What are the real reasons for the current decision of the Government of Japan, and how justified are the concerns of the Chinese side? Head of Center for Japanese Studies with the Institute for Far Eastern Studies Victor Pavlyatenko answered this question in an interview with "Pravda.Ru": "Some experts are trying to link this with the interests of the U.S. missile defense, and that, say, the decision was nearly dictated by Washington. First, the talks about it started not at the time of the Japanese government Democrats, but at the time of liberals when hot-heads demanded to cancel the old taboos.

Second, we should not overestimate the influence of the United States, which already is not the same as, say, 40-50 years ago. And, third, the military-technical cooperation between America and Japan, as such, exists without the removal of restrictions on arms exports. Take at least the system of sea-based missile AEGIS, created not without the involvement of Japan. The Japanese have participated and shared their dual-use technologies with the Americans before.

Most important, in my opinion, is a quite different point and it could be explained by the economy. First, the global arms market is a real Klondike, which the Japanese set for themselves and then shut down. Now, in times of crisis they are going to revise this decision. Second, China is stepping on its heels. Under the circumstances where it is displacing the Japanese economy from the second place in the world, for Tokyo it is important to use arms exports in order to minimize these processes.

Particularly due to the fact that the Japanese brand over the past half century has become one of the most respected in the world. In addition, under the increased competition on world markets, the emergence of new weapon designs of the Japanese arms that in terms of quality are not inferior to many competitors is able to give the Japanese economy a significant boost and strengthen its position.

As you know, military hardware is a product of the transformed civilian technologies, and its production and sales largely move the economy as a whole. This corresponds to the goal of Japan to become a world power with political and military power adequate to the current challenges.

As for someone's fears about rising Japanese militarism, they should not be overestimated. Although it is possible to predict that Japan is moving step by step to the abolition of the 9th "pacifist" Article of its Constitution. In recent years the issue of bringing the question of its future preservation to a national referendum has been raised a few times.

Given that over the past 20 years the mood of the Japanese society has changed markedly, we can expect that in the end, this restriction on the participation of Japan in the international affairs will be removed. However, we should not think that it will be followed by aggravation. Such actions should primarily be viewed as mere purely internal political affairs."