Iraq biggest mistake since Vietnam for US 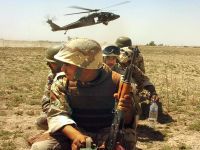 "The war in Iraq, biggest mistake in the military history of the U.S."

"Until recently, the war in Vietnam was considered the worst disappointment in U.S. military history. It seems, however, that the Iraq war far exceeds it: the U.S. strategy in Iraq failed miserably, as the United States and its allies failed to manage the conflict, and also domestic support gradually diminished," says Loren Thompson in an article entitled, "The Iraq war, the biggest mistake in the military history of the U.S." published December 15 in Forbes.

Now then, if we consider the ambiguous outcome of the war in Iraq and the recent withdrawal of U.S. troops from the country, it is clear that the Iraq war and subsequent occupation outweigh the error in the Vietnam conflict.

"The first lesson we learned shortly after toppling Saddam Hussein was that our main reason to invade the country, (nuclear) weapons of mass destruction, did not exist" (...). "We soon understood that another compelling reason for attacking Iraq, that is, the alleged presence of elements of Al Qaeda, was nothing but a fantasy." (...)

"In any case, the U.S. military presence in Iraq only strengthened sectarian militias and local supporters of Al Qaeda," according to Loren Thompson.

Upon discovery of the false reasons for the invasion of Iraq, the Bush administration, Bush then the U.S. president, said that, in reality, the objective of such an invasion was to overthrow the Iraqi dictator and establish the first real democracy in the Arab world.

Nevertheless, politicians and most U.S. citizens are aware that a democracy in Iraq does not benefit them.

Some experts believe that the Iraq war and the withdrawal of U.S. troops from that country may influence the 2012 presidential elections in the U.S., a country that has invested hundreds of millions of dollars in new technologies, military training and an endless number of tactics to fight the paramilitaries.

The invasion of Iraq, in addition to the subsequent geopolitical and military consequences, has cost Washington nearly a trillion dollars and, needless to say, that coincides with one of the worst economic crises in its history.

President Obama tries, perhaps, to improve the image of the mission of U.S. forces withdrawing its troops from Iraq, but Obama himself, as we know, is aware that the war in Iraq was a huge error.