French game of the Armenian Genocide 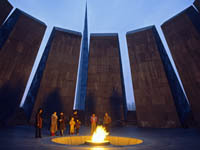 Last week, The French National Assembly approved the law introducing criminal penalties for denial of the Armenian Genocide in the Ottoman Empire in 1915. Now this wrongful act is punishable by a year in jail and a fine of 45 thousand euros. Turkey has prepared its harsh response.

The author of the bill is a member of the ruling party "Union for a Popular Movement," Valerie Boyer, but the opposition Socialists voted "yes" on the issue. Now the bill is in the hands of the Senate. It is assumed that the upper house of Parliament will pass the document in the next six months (in the summer of 2012 the powers of the Senate will expire), and President Nicolas Sarkozy will sign it.

The fact that in 1915 the Ottoman authorities conducted the Armenian genocide and murdered 1.5 million people (the number most frequently cited in historical studies) was recognized by France in early 2001. Five years later, opposition Socialist Party has promised to pass a law on genocide denial, but then it failed. At the same time the right-wing President Nicolas Sarkozy in 2007 promised to adopt the document. By the end of his term he kept his word.

Turkish Prime Minister Recep Tayyip Erdogan attempted to prevent a positive vote in France. He sent a letter to Paris, threatening to withdraw the Turkish ambassador from France and expel the French one from Ankara. In case of the adoption of the document the French will lose access to such sectors of Turkish economy as transport and arms. Political and cultural contacts will be phased out at the same time.

Turkey's President Abdullah Gul spoke in the same spirit. "This is a careless distortion of history for political purposes. It seems impossible for us to adopt the bill that is currently on the agenda of the French National Assembly that aims to ban the freedom of denial of unfair and unfounded accusations against our country and nation. I hope that France will not make this step, which is an affront to freedom of expression," he said.

On the voting day, over four thousand Turks gathered in the heart of Paris. However, shouting in the streets as well as letters by Gul and Erdogan had no effect on the deputies. The author of the bill, Valerie Boyer, accuses the Turks of "serious interference in the internal affairs of France."

Minister for Relations with Parliament Patrick Olier tried to smooth the situation. "This text is not directed against anyone, it is intended to complement our criminal law. But we cannot ignore the reaction of our Turkish friends. The French government is convinced that the common strategic interests and cooperation for peace and freedom in Syria and Afghanistan, working together in NATO and the G20, economic and cultural cooperation is strong enough to overcome the trials that can survive the relationship, " he said.

This time Ankara did not hear his words. The Turkish Ambassador in Paris Tahsin Burdzhuoglu said that he was returning to his homeland. Turkish media wrote that France would lose projects worth 40-50 billion dollars. Following this decision, Erdogan called the French "an example of racism, discrimination and xenophobia." Turkey stopped the cooperation with France under the NATO framework. Now, the French military planes and ships will not be able to use Turkish airfields and ports. Economic and political cooperation has been minimized as well.

On his part, Armenian Foreign Minister Edward Nalbandian expressed satisfaction with the decision of the French deputies. "France has reaffirmed its reputation of a cradle of human rights and once again proved the commitment to universal values. 10 years ago, recognizing the Armenian genocide, the French people have demonstrated that human rights are their highest value. They reiterated that crimes against humanity do not have statute of limitations, and that their denial should be unequivocally condemned," he said.

The events of nearly a century ago that happened during the First World War are still on the minds of not only historians but also politicians. The evidence of genocide is the photos of those years, reports of foreign diplomats and missionaries, and telegrams of Turkish statesmen. However, the information the Turkish archives is still unavailable, and there is still no complete picture of the tragic events of 1915. The main question is how many Armenians were killed, and whether the events should be considered a deliberate extermination on ethnic grounds or "just" a mass murder.

The Armenian side insists on the deliberate genocide of half a million people (sometimes the figure of two million is cited, sometimes one million). Historians of various countries talk about 600 to 800 thousand. In any case this is a very large number. One can also add that in those years, hundreds of thousands of Armenians fled from the Ottoman Empire and many Armenian churches have been destroyed. Cases of repression against the Armenians that the Turkish authorities often considered disloyal were ongoing before and after 1915.

The Turks say that no more than 200 thousand have died, and then largely because of hunger, disease and epidemics. The reason is clear: if the genocide is recognized, the descendants of the victims will have grounds to claim billions of dollars in damages. Therefore, the modern Turkish Republic is trying to stop even the talk of the genocide. Any attempts to recognize the genocide outside of the country cause extremely painful reaction.

At present, the Armenian Genocide is recognized (among others) by Russia, France, Greece, Poland, Canada, 42 U.S. states and some regions of the UK, Spain and Australia. The EU does not impose the recognition of genocide as a condition of accepting Turkey into its ranks, but this is one of the reasons why Greece, Cyprus and France are blocking the entry. At the same time, Germany is unlikely to recognize the genocide in the near future. The country has approximately three million Turks, and the German authorities are unlikely to make them angry. However, the fact of the massacre (not genocide) was recognized by the Bundestag in 2005.

The answer to the question why France is at the forefront of the process of recognition of Armenian genocide lies in the fact that the local Armenian community is numerous and influential. It is believed that today nearly half a million Armenians reside in the country, and if we count those partially Armenian, the number will amount to over a million.

As for French politicians of Armenian origin, two names can be highlighted. The first one is the former Prime Minister Edouard Balladur of France, who was born in Turkey. The second is a close ally of Nicolas Sarkozy, Patrick Devedjian, now occupies the post of general secretary of the ruling party "Union for a Popular Movement." He is considered the main lobbyist of this document. Ultimately, he was heard by the deputies of the ruling party. But the Socialists also have their Armenians.

The decision on punishment for the Armenian Genocide had an internal policy component. Perhaps, Sarkozy and his supporters were driven by compassion for the victims of the events that took place 96 years ago. France is facing presidential election, and Sarkozy's rating is very low. It was very important for him to enlist the support of the Armenian community. He could clearly use extra half a million votes. This factor outweighed even the possible economic and political losses from reducing the level of relations with Turkey. Paris may have not thought about long term consequences.