The adventures of the Russian language in Latvia

Latvia is getting ready for a referendum on granting the Russian language the status of the second state language. Latvian politicians are strongly opposed to this initiative as the Parliament voted "no" on the issue, and President Andris Berzins is of the same opinion. However, neither the President nor the Parliament can cancel a popular vote.

On December 19 the Central Election Commission of Latvia was forced to announce a vote. According to him, over 187 thousand signatures (12 percent of the population) for holding a referendum have been collected. Signatures of 10 percent of the population are required in order to declare a referendum. This means that the organizers of the campaign "For mother tongue" commenced in the spring can celebrate an intermediate victory. 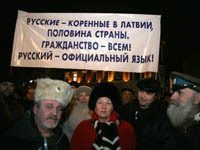 The banner says: Russians are natives in Latvia, half of country, citizenship to all! Russian - official language!

After this decision of the CEC, President Berzins sent an amendment to the Constitution granting Russian the status of an official state language. If the Saeima's vote is negative, then the popular vote will be tentatively held in February. 50% of the country's total population must vote for the decision for it to come into effect.

By submitting documents to the CEC, Berzins did not hide his negative attitude towards the possibility of a second official language. He even declared his readiness to resign if such decision is made. "Granting the Russian language the official status would be a rejection of Latvia as a nation state and will come into conflict with the meaning of the Constitution. It does not promote social unification," the President wrote in a letter to the members of the Parliament.

From the very beginning chances that the deputies would make a positive decision were near zero. Only the opposition party "Harmony Centre" that mostly received the votes of Russian-speaking residents was prepared to support the document. "Latvian" parties are united in their opposition to the emergence of a second state language.

"I am deeply convinced that the deputies have no moral right to support the transfer of the bill to the committee, as its content is contrary to the oath of the parliament that the members gave at the first meeting - to strengthen the position of the Latvian language as the only state language", stressed the Chairman of the Saeima Solvita Aboltina, commenting on the document received from the President.

As a result, no sensation has happened. 60 deputies voted against and one abstained. Parliamentarians from the "Harmony Centre" left the room as a sign of protest. Now the referendum is unavoidable.

What are the chances of success of the referendum on giving the Russian language the official status? Let us look at the ethnic map of the country. Today Latvians make up nearly 60 percent of the population, and there are virtually no Russian speakers among them. However, Russian-Latvian residents are registered as Latvians. It is hard to say what their percentage is, but they may be voting "yes."

Yet, would this be enough? This is an important question. In the end, the nationalists (in one way or another) were elected to the Parliament by the people. The majority of the representatives of the titular nation voted for them. For ethnic Latvians it is easy to disrupt the referendum by simply not showing up. Even if all the Russians, Belarusians, and Ukrainians vote, this will not be enough to validate the results. The share of the Russians is over 40 percent, but over a third of all Russians in Latvia are non-citizens who do not have voting rights.

What are the chances of a successful outcome of the referendum on the official status of the Russian language in Latvia? What is the motivation of the Latvian Russians and Latvians in this matter? Mikhail Alexandrov, Head of the Department of Baltic countries with the Institute of CIS and Baltic States, commented on the situation for "Pravda.Ru": "From the very beginning there were no chances that this document would pass in the Parliament. A couple of defectors would not change anything.

As for the upcoming referendum, some of ethnic Latvians could support granting Russian the status of a state language. However, the positive outcome is virtually impossible. For this to happen, you need more than half of all adult citizens to vote "yes", and this is science fiction. The organizers of the referendum should have involved non-citizens in the voting process, should have created a public commission. Then the outcome would be more revealing.

The status of the Russian language for Russian-speaking population in Latvia is not important. Most of them have an excellent command of Latvian. Their attitude to the problem was changed by the outcome of the elections. At the elections the first place was taken by "Harmony Centre", but it was not accepted into the ruling coalition. Despite all the tricks, display of loyalty, language skills and understanding of Latvia's history you will not be accepted anywhere if you are Russian.

Originally the referendum was conceived as a response to the venture of the nationalists to shut down all Russian schools. Initially, "Harmony Center" did not support the idea, but after the election the picture has changed. Russian voters realized that Latvians have occupied everything. This looks like pure apartheid at the ethnic and genetic level. It seems like if you are not Latvian, you cannot be in power.

If we talk about ethnic Latvians, with ordinary people you do not feel their national complexes (although, perhaps, they hide them). The issue is that the West purposefully placed Russophobic elite at the head of Latvia so that the country does not become more pro-Russian. Those who are walking "out of step" in this respect should be cut off from the get go. Many Latvians over 20 years of independence have succumbed to this ideology. They have been brainwashed, they are susceptible to hidden Russophobia.

While Latvia was joining the EU and NATO, while the economy was growing before the crisis, there were certain grounds for such sentiment. Now, the country is going through difficult times. Perhaps, history will teach them that it is not all well in the West, and that they should have a more balanced approach to their neighbors, including Russia. Over time, perhaps, Russophobia will go away, but so far Latvians are highly susceptible to it. "