The first group of observers from the Arab League arrived in Syria. They are expected to fulfill the mission of verifying the reality of the situation in Syria. 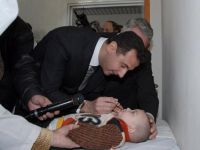 President and physician Assad shows loving care toward a child

The first group of 20 observers from the Arab League arrived on Thursday in Damascus, the Syrian capital, to coordinate their work with local competent Syrian authorities for a month in legal, administrative, security and human rights work, according to Telesur correspondent in the Middle East, Hisham Wannous.

"The mission will maintain contact with the Syrian authorities to coordinate their work from the date in which the protocol was signed and it is expected to culminate in January," said the journalist.

Of the total of 150 observers who arrived in Damascus to meet with the Syrian authorities, about 60 belong to Arab Gulf countries.

The country's authorities "expect the situation on the ground to be treated with objectivity and that they will objectively transmit the details of events. This mission will prepare daily reports and these will be forwarded to the General Secretariat of the Arab League," whose leaders warned that sanctions will be lifted depending on what they find in the reports of the mission.

"Syrian citizens have been consulted, and although they welcome the visit of these observers, they doubt the intentions of the Arab League with regard to Syria," the journalist pointed out.

In addition, the Foreign Minister of Saudi Arabia said the decision to take Syria's case to the Security Council of the United Nations also depends on the "performance" of Damascus with the observers.

Last November 27, the Arab League foreign ministers approved a list of economic sanctions against Syria which was recommended by the finance ministers of the bloc, due to alleged Syrian government repressions as a result of the events that took place in the nation since March.

Observers have free access to all areas of the country "except sensitive military areas because there are secrets and confidential matters that exist. It is known that they can even go into the prisons and hospitals and meet with detainees and patients," said Wannous.

He added that the group will be accompanied by security forces to ensure their protection during the visit without interfering with their work while they contact Syrian citizens fond of the government of Bashar al Assad, as well as opponents.

A UN report has claimed that thousands of people have been killed since protests began in favor and against the Syrian government since March.

The Syrian government has clarified several times that leaders and members of terrorist groups from Turkey, Lebanon and Jordan have infiltrated the country to destabilize it and create chaos in the nation, according to investigations and intelligence provided to President Assad.

Several members of these terrorist groups have been arrested by Syrian security forces.

Last Monday in Cairo, Syria signed the protocol to send observers to its territory whose mission is to verify whether Damascus respects the Arab roadmap to solve the crisis on the cessation of violence, the protection of civilians and the withdrawal of armed elements among the population.

14:54
Ukraine and the West may force Russia to use tactical nuclear weapons
13:33
Russia to take control of entire Donetsk People's Republic within its 2014 borders
19:02
Mobilised citizens to control and defend new Russian territories
15:49
Senator Valentina Matviyenko: Let the whole world wait till October 4
15:06
New Russian territories to require new Russian Constitution
14:36
Russia pays attention to Poland's 'Thank you, USA' remark after Nord Stream accidents
14:22
US Embassy in Moscow urges Americans to leave Russia immediately
18:52
US helicopters fly above the sites of Nord Stream accidents
16:54
Referenda in Luhansk, Donetsk, Kherson and Zaporizhzhia regions completed
16:37
Anti-terrorist operation will give the upper hand to the Russian Army
Columnists
Why was it important for Biden to start war in Ukraine?