The European humiliation of Viktor Yanukovych 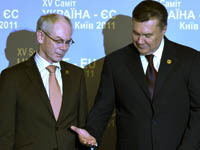 Ukraine has suffered a major diplomatic defeat in the European direction. The EU has refused to sign an agreement on association and free trade until former Prime Minister Yulia Tymoshenko is released.

On December 19, the EU-Ukraine summit was held in Kiev. The Ukrainian side was headed by Viktor Yanukovych, the European - by the EU President Herman Van Rompuy and European Commission President Jose Manuel Barroso. Ukrainians had truly Napoleonic plans. They were going to sign an association agreement with the EU, which involves the creation of a free trade zone. For all countries who intend to become EU members this document is always the first step towards this goal.

However, no document has been signed at the meeting, even a generic one. Van Rompuy at a press conference stated a specific condition for the beginning of a substantive discussion about Ukraine's European integration. In fact, Yanukovich was demanded to release Yulia Tymoshenko, who has been in jail since August. In October she was sentenced to seven years in prison for exceeding the authority in signing gas contracts with Russia in 2009.

The Europeans have been seeking the release of Tymoshenko for several months, and their point of view was restated yet again. Van Rompuy, commenting on the views of Europeans, said that they were worried about politicized justice in Ukraine. He continued that the example of Tymoshenko's case was the most prominent. He also expressed concerns about the restrictions on the free assembly of people and the parliamentary elections in 2012.

He stressed that this concern will have bearing on the final ratification of the agreement, as these values ​​are crucial for the further rapprochement between the EU and Ukraine. In the end, all that has been achieved by the Ukrainian side is the announcement of the Europeans that all the details of the future document have been agreed upon. The EU officials did not say when it will be signed.

During the same event Yanukovich complained that the EU, allegedly, is not fulfilling its obligations under the European Energy Charter. Apparently, the Europeans have agreed to build gas storage facilities in Serbia under the project "South Stream", in which Ukraine is not involved.

Again, he was not heard by the other party. Barroso said that Ukraine must fulfill the obligations under the European Energy Charter. He added that the EU is closely following the Russian-Ukrainian gas talks. "Transit in Europe should be stable. A different scenario will affect the image of both Russia and Ukraine", he said.

The rapprochement of Ukraine with the EU has failed again. The European politicians did not allow Ukraine even in the "waiting room" of the EU. It is obvious that Brussels is not ready to accept a huge 45,000,000-strong country in the next few years. If the "orange" team of Viktor Yushchenko and Yulia Tymoshenko friendly with the West was not able to "Euro-integrate" Ukraine, what can be said about Yanukovich, who was not able to get rid of the label of a pro-Russian politician(in the eyes of the EU).

Independent Ukrainian political analyst, editor in chief of "Kiev Telegraph" Vladimir Skachko commented on the failure of the summit "Ukraine - EU" for "Pravda.Ru".

"Ugh, it was disgusting to look at this summit ... The Ukrainian government has demonstrated a clear propensity for political masochism.

The Ukrainian leadership needed this event in many ways to get trump cards in gas negotiations with Russia. Something like, if you do not want to lower the price of gas for us, then we will go to Europe. There is, however, a theory that Mr. Yanukovych needed this failure just to be rejected by the EU and with a clear conscience go closer to Russia -to the Customs Union, single economic space.

In the end, all ended in a complete disgrace in the European direction. There is no chance of any fundamental improvements. No such signals were given by the Europeans. Ukraine wanted pragmatism, but ended up with masochism instead. We wanted the best, but it turned out even worse than usual, despite of the attempts of the Ukrainian Foreign Ministry to embellish it.

Why did this happen? Because the EU deliberately exchanged the relations with Ukraine for the fate of one particular woman - Yulia Tymoshenko. They need her as a lever of pressure on Yanukovych. But Europe's relations with Tymoshenko are a blatant example of double standards. If you are the opposition that is one of theirs, you can falsify the election results, intimidate and kill. The EU is brazenly and openly interfering in our internal affairs.

Nothing helps Yanukovych, even the European Football Championship that Ukraine will host along with Poland next year. We tried our hardest to show the Europeans the best, and they spat at us. Of all the teams only Sweden and France have agreed to play in Ukraine. Others chose other places - even the ones who should play in the Ukrainian and not the Polish part of the championship.

No progress in relations with the EU should be expected until the parliamentary elections scheduled for the fall of next year. And then only if Tymoshenko is allowed to participate in them."