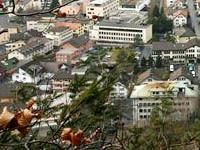 Starting December 19, another country was added to the Schengen zone - Liechtenstein. From now on there will be no control points on its borders. This event makes us take a closer look at the principality whose influence far exceeds its dimensions, and whose royal family has a very worthy place among the European "colleagues."

The small principality with a population of 35 thousand people "lost" in the Alps between Switzerland and Austria, signed an agreement in 2008 to create an association with the EU. At the same time, the total abolition of border control with Austria (Switzerland is not part of the European Union) was postponed because of complaints of some EU countries. They were saying that Liechtenstein does not fight with money laundering and cannot be allowed into the area where not only people but also capital services move freely.

However, it seems that all the problems have been solved. European Commissioner for Internal Affairs Cecilia Malmström, commenting on the expansion of Schengen, said that the Schengen area is growing rapidly, allowing a larger number of European citizens and travelers from other countries move freely through the area. She added that the addition of Liechtenstein means further development of the EU major achievements. Liechtenstein, that has become more accessible to foreigners, is one of the most interesting parts of Europe. The level of per capita income, until recently, was the highest in the world. According to the last pre-crisis year 2008, it amounted to 120 thousand dollars. During the crisis, the Principality dropped to the second place, yielding to the other European "dwarf" - Monaco. But the income of its citizens even now amounts to 113,000 dollars per person.

Liechtenstein has a very long history. It was once populated by Celtic tribes, conquered at the turn of our era by the Romans. Around year 300 Christianity was established in the country. In 5th-10th centuries the territory was part of the Kingdom of Franks. Then the Germanic tribes gradually replaced and assimilated the Celts. Since then, the dominant language on this land was German spoken in Austria and in neighboring cantons of Switzerland.

However, at the time this land was not called Liechtenstein. In the medieval era principalities Vaduz and Schellenberg were located here. Both of them belonged to the duchy of Swabia and the Holy Roman Empire (of the German Nation). In 1507, Emperor Maximilian of Habsburg gave Vaduz special rights, including sovereignty and tax collection. For a long time this alpine land was claimed by the Habsburgs, but ultimately their fate took a different turn.

At the turn of the 17th-18th centuries the Lichtenstein family that owned considerable amount of land in Austria, Germany, and the Czech Republic appeared on stage. Its representatives were keen to gain a foothold in the Imperial Assembly (Reichstag), but they needed the land controlled by the emperor (even if via his vassals). As a result, in 1699, Hans-Adam of Liechtenstein bought Schellenberg land from the members of the Hohenems family, and 13 years later- Vaduz. In 1719 head of Liechtenstein family Anton Florian was introduced in the Reichstag, and the acquired lands were united into the principality of Liechtenstein.

It was too early to talk about independence. Until 1806, Liechtenstein was simultaneously part of Austria and the Holy Roman Empire. After the disappearance of the latter, the principality joined the German Confederation, while remaining a vassal of Austria. In 1860 dukes became hereditary of Austria Reichsrat members (the parliament). Finally, in 1866 the principality officially gained independence, but close ties with Austria (more precisely, Austria-Hungary) have remained. Liechtenstein did not have its own currency and the Austrian crown was used on its territory.

In the early twentieth century there have been significant changes in the position of Liechtenstein. In 1918, Austria-Hungary was among the countries that lost the First World War. The Empire disintegrated, and several states appeared in its place. As a result, Liechtenstein chose to deal not with the Republic of Austria, but with Switzerland. In 1921 the Swiss-Liechtenstein customs union was created. The Swiss franc became the currency on the territory of the principality, Switzerland undertook to represent the interests of Liechtenstein abroad. This situation remained unchanged to this day.

For many years, Liechtenstein has not entered into any international organization. Only in 1990 the principality joined the ranks of the UN, then came the turn of the European Free Trade Association (EFTA), OSCE, Council of Europe. Now it is the time for the Schengen zone. Incidentally, as a member of the Council of Europe, Liechtenstein has nearly blocked the Czech Republic from entry. The stumbling block was the Lichtenstein lands nationalized by the authorities of Czechoslovakia after World War II. The problem has not yet been solved.

Modern Liechtenstein is a prosperous state. The main source of its income is banking services. Due to lower taxes on capital and earnings, as well as a closely guarded banking secret, Liechtenstein succeeded in becoming a major financial center of Europe. In fact, this is an offshore zone as the country is not included in the EU and not subject to its laws. According to many EU countries, it allows Liechtenstein to profit at the expense of dirty money. However, in recent years the fight against money laundering by the banks has been strengthened.

However, banks are not the only thing that keeps Liechtenstein afloat. Its tiny territory hosts metalworking, precision instrumentation and optics companies. Its agriculture specializes mainly in grazing and dairy production. A special glory was brought to the principality by its great ski resorts. Every year, hundreds of thousands of foreigners come to Liechtenstein to ski.

The current 66-year-old Prince Hans-Adam II is a very interesting persona. He was not afraid to go against the dominant political trend in Europe. In 2003 he organized and won a referendum not for the restriction, but the expansion of his powers that were already significant. However, if the parliament wants to suddenly turn the country into the republic of Liechtenstein, Prince will not be able to impose his veto. Yet, this scenario is hardly likely.

The Liechtenstein family that was related to the Romanovs has developed a longstanding relationship with Russia, as some members of the family were once Austrian ambassadors in Russia. In addition, the Lichtenstein family is known not only as politicians but as passionate art collectors. Their collection includes works by Leonardo da Vinci, Peter Paul Rubens and other masters.

This is Liechtenstein - one of the richest countries in the world that has princes whose rights the people do not want to limit. There are no doubts that the Principality will be the "gem" of the Schengen area.