Activists of Ukraine's FEMEN movement claim that they were kidnapped after their topless action against the regime of Belarusian President Alexander Lukashenko. The action took place in Belarusian capital, Minsk, on December 19. The women have already returned to Ukraine. In the meantime, the chief of the KGB of Belarus, Vadim Zaitsev, stated that his agents had not taken any actions against the Ukrainian women. According to him, it was a predetermined provocation against the special services of Belarus. 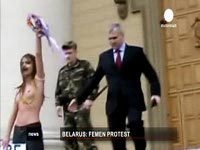 Inna Shevchenko, Oksana Shachko and Alexander Nemchinova arrived in Kiev on Wednesday night. The women came to the Ukrainian capital being accompanied by the Ukrainian consul. The consul arrived at the village of Beki, the Gomel region of Belarus, immediately, after it was said that the FEMEN activists were staying there. The women said that they had been tortured by strangers in the woods, Interfax reports with reference to the press secretary of the Foreign Ministry of Ukraine, Alexander Dikusarov.

The press release posted on FEMEN's LiveJournal page said that Inna Shevchenko was the first to have contacted the movement. The woman said that she and her two associates had been seized by special services of Belarus. According to her, the agents blindfolded the women and put them in the bus, which was then traveling all night. Afterwards, the agents took them to the forest, poured oil on them and threatened to set them on fire. The men also made the Ukrainian women strip naked. The agents also threatened them with a knife. The women said that the agents were filming all the tortures.

When the men got tired with what they were doing, they took the women's documents and money and left them alone in the forest. The feminists managed to find the nearest village, where they could use a phone.

According to Belarusian news agency BelaPAN, the police took the three Ukrainian girls from the village of Beki to the nearest police station for investigation. The Ukrainian consul arrived there soon afterwards. In the evening, the women were examined at the local hospital. The doctors did not find any serious injuries on their bodies, except for bruises on arms and other body parts.

The police officers told reporters that the women had been found in the border zone. Since the women had no documents with them, they had to be taken to police station. The Ukrainians will not be punished for staying near the border because the women had found themselves there against their own will.

The feminists told reporters that they had been arrested by six men. The men did not introduce themselves. They pulled hats over the eyes of the women and put the Ukrainians in the bus. In the forest, the officers assaulted the women, made them remove all of their clothes, poured green antiseptic on their heads and ordered the women to hold posters with Nazi swastika.

It was also said that Australian journalist Kitty Green, who took photos of FEMEN's action in Minsk, was made to leave Belarus. The authorities of the country made the journalist go to Lithuania.

Three semi-naked FEMEN activists conducted the action of protest near the building of the KGB of Belarus on December 19. The date marked the anniversary since the dispersal of the unauthorized opposition meeting after the presidential election in the country. One of the women had hair and moustache on to look like President Lukashenko. The two others also stuck a la Lukashenko moustache on.  The feminists were holding "Long live Belarus!" and "Freedom to political prisoners" posters.

The action continued only for several minutes. The police arrested the women, but then released them quickly. The three Ukrainian females were kidnapped in five or six hours.

Belarusian officials refused to release any comments about the incident on Tuesday. On Wednesday, the head of the Belarusian KGB, Vadim Zaitsev, stated that the action of the Ukrainian movement was a provocation against the special services of Belarus, Interfax reports.

"This is a gross provocation that we have unfolding. We will investigate who is standing behind it. They [the women] can say whatever they want. Our men did not touch them," the KGB chief stated at a news conference.