Kim the Third and the new North Korea 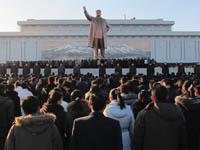 Which way will North Korea go? This is a No. 1 question for many experts right now. The legendary leader of the isolated country has died. His position has been taken by Kim Jong Un. Some Western analysts believe that the new Kim will turn North Korea towards the liquidation of the totalitarian regime.

"The Third" Kim graduated from an international college in Switzerland's Bern. However, this detail is not enough to make everyone believe that North Korea will change. First and foremost, Kim Jong Un was staying under control in Europe not to let the young man "fall under the influence of rotten capitalism." South Korean publications said, for example, Kim Jong Un was leading a secluded lifestyle and hardly appeared anywhere, except at school.

As soon as he returned from Bern, Kim Jong Un continued his education at the defense university in Pyongyang, where he received the appropriate ideological "treatment". At any rate, his candidacy of the successor appeared to be a lot more appropriate to his father than the candidacy of Un's notorious brother Kim Jong Nam.

Even if Kim Jong-il decides to change the political course of his country, he will have to work hard to do it. Even though North Korea is often referred to as the "red monarchy," the leader of this country is not a monarch at all. He does not hold the power to solve the fate of his nation without the knowledge of other leaders of the Labor Party of Korea.

One should pay attention to publications in South Korean media outlets. According to them, the second most powerful man in the North is General Chang Song-taek. One should bear in mind the fact that Kim Jong Un is one of the world's youngest leaders. He is not even 30. His age is unknown; different sources give different birthdates in 1982, 1983 and 1984. More importantly, Kim III will not be able to do without help. Most likely, the new leader of North Korea will be guided by other most influential figures in the country. Therefore, one may not even hope for any changes. The political and defense establishment of the state will not let the man do anything, even if the man is a son of the late "Dear leader."

There are many of those who want those changes to happen, of course. Japan traditionally views North Korea as the primary source of danger. South Korea is another country. One can not do without the USA, of course. For America, the existence of North Korea is a big problem.

Washington does not mind a change of political power in Pyongyang. However, US officials simply do not know how they could do it. On the one hand, the North Korean regime is in deep crisis. The economy of the country needs to be reformed. On the other hand, the USA can not work with North Korea similarly to the Iraqi scenario: North Korea has nuclear weapons. The Libyan scenario is a hard nut to crack too: there is no opposition in North Korea per se. A coup or a color revolution in the north of the Korean Peninsula does not seem to be likely.

One should also take China into consideration. North Korea depends on China directly. China provides an extensive economic help to the country - with money, fuel and food. As a matter of fact, China's influence is the most important one for Pyongyang's future political course. For Beijing, it is extremely important to preserve the North Korean buffer zone. Otherwise, it may turn into a danger zone. As long as China keeps North Korea under control, one should not be expecting any changes either.