Bloodbath in Syria is just around the corner 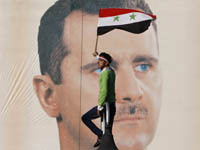 Israeli politicians continue to bury the regime of Syrian President Bashar Assad. They discuss possible consequences of Assad's fall. US media point out a serious evolution in the outlook of the Israeli administration regarding the Syrian issue. Before December, many Israeli officials, except Foreign Minister Avigdor Lieberman, tried to withhold comments about Israel's attitude to the events in Syria. It seemed that Israel was not concerned about Bashar Assad's regime. Nowadays, Israel's top officials point out that Assad's regime is doomed.

Israel's Defense Minister Ehud Barak pointed out on December 6 that Assad would fall in two weeks. Israel's another influential politician in the face of the Minister for Strategic Affairs, Moshe Yaalon, as well as representatives of the ruling party, Likud, say the same. According to Yaalon, the collapse of Assad's regime was only a question of time. Israeli officials believe that the influence of Iran and radical anti-Israeli groups in the region in general will decline afterwards. As for the possibility for radicals to come to power in Syria, Barak and Yaalon hope that Islamists, including the Muslim Brotherhood, will not be able to get hold of power in a secular Syrian society. According to them, "moderate Sunnis" will win the elections in Syria after Bashar Assad's regime ends. It is worthy of note that the majority of Syrians are Sunnis.

This way or other, but the Israeli political establishment seems to publicly ignore the warning from then-Prime Minister Ariel Sharon. In 2005, Sharon warned the US administration against interfering into Syrian affairs. Sharon said that Assad was "the devil we know" and added that his place could be taken by much more radical Muslim brothers.

Nevertheless, Minister Moshe Yaalon does not rule out a possibility for bloodshed in Syria. One may dwell upon the political strength of the Syrian leader for a very long time. However, it is clear that Assad is not going to yield. He is going to fight, because he still enjoys the massive support of the population. Moreover, Assad does not feel alone. Syria receives support from Iran, not to mention Russia's and China's actions at the UN Security Council.

To put it in a nutshell, a war in Syria becomes more and more obvious. It is important to analyze, who and what may take Assad's place. Let's assume that the Syrian leader has been toppled. Who is going to take the top then? Will it be those "moderate Sunnis" of whom Mr. Barak spoke? One would have to see first, what goes for the term "moderate." Who of the acting Sunni leaders can be referred to as "moderate?" Which Sunni group has real power in this country? It is an open secret that the power of certain movements can be determined with the number of guns under the conditions of chaos. Islamists will ride a high horse inevitably.

Some experts categorize the Salafis as Sunnis as well, since they support the return to Quran and Sunna. The slogan of one of the main Syrian Salafis, Sheikh Araur is the following: "Christians to Beirut, Alawites - to graves."

Compared to them, the ideas of the Muslim Brotherhood look a bit more moderate. In the beginning of December, the press secretary of the Muslim Brotherhood in Syria, Zuhayr Salim, reportedly said that Syria, as an artificially create state, had no future. "How did Syria appear? It appeared as a result of the Sykes-Picot Agreement (in 1916). We do not recognize that agreement! Syria is a temporal phenomenon. Our goal is to create the joint state for the entire Muslim community!" he said.

There are no other "moderate" Sunni groups who would be able to challenge the Muslim Brotherhood. Their ideas do not leave any space after a possible collapse of Assad's regime for a quarter of the Syrian population at least. Will there be a place in the Muslim community for more than two million Syrian Christians?

Moshe Yaalon is probably right about the bloody scenario of Assad's fall - that's for certain.