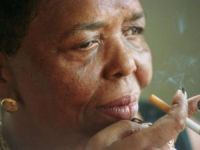 At 70 years of age, Cesária Évora's body left us in the Hospital Baptista de Sousa, São Vicente Island, Cape Verde this Saturday December 17. What will live on is far more than her voice, for her voice was simply a vehicle to convey her heart, her soul and the heart and soul of Africa. What will live on is the melancholy, the nostalgia, the unrequited love, the burning hope and desire, the love, the humanity... of Africa and Africans, in Cesária Évora's voice.

And that, nobody can destroy or take away from this angel of world culture, born in Mindelo, Capital of the Isle of São Vicente, Cape Verde on August 27, 1941, who spent the first years of her life singing and enchanting and bewitching with her talent, and only in 1988, at 47 years of age, did she record her first album, in Paris.

Cesária Évora sprang onto the world stage in 1992, at 50 years of age, after presenting her fourth album, Miss Perfumado, in Paris and after the subsequent shows in the City of Paris Theatre. Six albums had Grammy references, a prize she won in 2004 (World Music, Voz d'Amor). Eleven albums are only part of her legacy, the last one being Nha Sentimento (2009).

Cesária Évora, or "Cizé" to her friends, had been born into a musical family - her father Justiniano da Cruz played the banjo, viola and violin, her brother played the saxophone and among the family friends, was the Cape Verdean composer, B. Leza. Her instrument however was her soul, through her voice, and from an early age she sang in the streets, in the market places "to forget sad things" in her words. Later, bars, hotels and a general acclamation as the Queen of Morna (Cape Verde's national genre of melancholic song).

Her rendition of the song Sôdade (Nostalgia/homesickness) truly gives wings to any heart or soul from any generation from any age anywhere on Earth. Now that is world patrimony and Cesária Évora is its champion. Whoever listens to the voice of Cesária Évora hears a soul flying, hears the unlocking of thousands of years of Africa's secrets, hears the spirit of Cape Verde, witnesses first-hand the heart of Africa.

How hurt the hearts of Africa, of Cape Verde, of the CPLP space are today; how noble, how honoured they shall be tomorrow with the legacy of Cesária Évora smiling upon them.