Señor Moreno-Ocampo, are you serious? 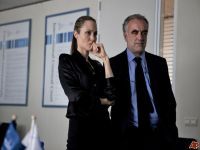 Quite how the ICC Chief Prosecutor, Luis Moreno-Ocampo, who has not won a single case in eight long years, does not choke on his words as he speaks of "international law" is beyond logic. In fact, when we examine his words, we understand why and question what his credentials are, apart from friendship with certain US agencies.

Speaking at the tenth session of the Assembly of States Parties to the Rome Statute of the ICC, Moreno-Ocampo had the audacity to speak of "a new global order based on law", when he made declarations about Muammar al-Qathafi, Saif al-Islam al-Qathafi and Abdullah al-Sanussi, saying, and I quote: "We need to issue the arrest warrant...that will stop the crimes, that will stop the rapes".

Well no wonder he hasn't won a case. Let us face it, what "lawyer" would still be in a job if he had not won a single case in eight years? Only someone protected and with ties. Let us now investigate what ties Mr. Moreno-Ocampo has, and to whom. So what authority has Moreno-Ocampo to speak about justice, when he witnessed the Libyan Arab Jamahiriya being assailed by NATO and the terrorists its unleashed and sat back saying nothing?

In fact, Señor Moreno-Ocampo has not issued one single arrest warrant for any of these demonic crimes in Libya and there he is talking about the law? Since the greatest travesty of justice is the ICC at The Hague, and apparently its Chief Prosecutor, perhaps the first step would be to dismantle this living joke, this insult to the precept of international law and replace it with a proper organism which used the same set of weights and measures for all?