David versus Goliath: The question of Sovereignty versus Federalism 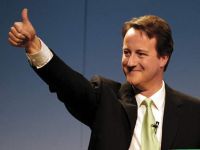 For once, I find myself on the same side as David Cameron, the David who stands alone against the fiendish Goliath of the European Union, that all-engulfing rampaging monster which gobbles up national identities, disregarding its citizens as it makes sweeping decisions over their heads, sending the lemmings scurrying over the cliff-edge...

I could not have disagreed more with David Cameron over his policy in Libya, as indeed I have disagreed with Britain's jingoistic and arrogant foreign policy for as long as I can remember - the last five Prime Ministers have been involved in nine wars, sowing the seeds of hatred for years to come, as the Foreign Office believes it is a sort of external Department of Trade and Industry and sees military campaigns as good business.

The bottom line cementing where I agree with David Cameron on the first point and disagree on the second is based upon the notion of sovereignty in a globalised world.

Those of us who dreamed of a global nation of brothers and sisters living along the shores of our common lake - the seas - helping one another more through altruism than self-interest, have been brought tumbling to Earth time and time again as collectively, a great number of nations, usually centred around NATO, egged on by the nonchalance or disinterest of the rest of the international community, committed outrages against international law, human rights and common decency.

Those who had hoped that globalisation of economies would walk hand-in-hand with a new globalised spirit of common values, common practices of goodwill and a new spirit of fraternal relations, looked on aghast as the world community proved incapable of solving the Middle East crisis (basically through an absence of will fuelled by interests and lobbying) and as NATO swung into action against Serbia, supporting Albanian terrorists, then Afghanistan (and no, the real reason was not 9/11 but that is a long story), then Iraq and now Libya. The sovereignty of these nations was disrespected, flouting the terms of the UN Charter, UNSC resolutions and violating the norms of all diplomatic agreements since Westphalia (1648) and in the unilateral creation of "Kosovo", the countries jumping on the bandwagon disregarded their obligations under the Helsinki Final Act (1975).

This Act was signed by the USA, Canada and all European States with the exception of Albania and Andorra and its underlying principle was the recognition of existing frontiers, the laying down of guidelines for sovereignty and the inviolability of this precept. While the foreign policy of David Cameron's United Kingdom has violated this principle, along with its NATO bed pals in recent decades (and we ask, how Constitutional is NATO in its Member States, for where in any Constitution can the conduct of a State's foreign policy be handed over to external parties?), his courageous stance on Europe is commendable.

Only yesterday, as I called him a "spineless jellyfish" I was hoping that he would prove me wrong, and I am very happy to say that he has. The question as to whether it was a strategic or a political one, pandering more to the needs to hold together his own party after a substantial number of Tory backbenchers started showing signs of revolt, is irrelevant.

It makes sense to form a Federation out of States certainly with a common identity, probably with common values, maybe not common cultures. How, then, do you form a Federation out of the Tower of Babel which is the European Union? Compare the USA, the Russian Federation, the Federal States of Micronesia and Brazil with the European Union and you will see that where it makes sense with the former, it certainly does not in the case of the latter.

The last five thousand years of history have taught Europe to stand together through Treaties of friendship and cooperation, which is largely what existed with EFTA and with the beginning of the Common Market but which has been overtaken by a fast-lane occupied by budding Eurocrats who have tried to go too far and too fast. What happens to those who drive too fast and do not pay attention to where they are going?

Twenty-six nations, joined by Sweden, Hungary and the Czech Republic, countries which had initially stood alongside Britain but which buckled spectacularly under the pressure at the last minute, will now try to get out of the hole they have dug for themselves by digging themselves further in. They will not ask their citizens whether they want to have their sovereignty taken further away from them, they will just plough ahead and guess who will pay for the consequences of their actions?

David Cameron can sleep well tonight knowing he stepped out of the hole at the right moment and knowing that the UK is the one country in the European Union that can use leverage mechanisms which its partners have signed away. David Cameron knows that he has an Atlantic trading triangle to exploit with the USA and Canada, and the UK has the Commonwealth which it turned its back upon partially when it joined the EU. David Cameron has defended his country's sovereignty, the UK has options.

And therefore those thirty kilometres of Channel which separate the British Isles from France may just be enough for the EU not to constitute a stone around Britain's neck when it sinks. When it does, the citizens of the EU will look to their leaders and ask them why they did not act like David Cameron. 26 against 1 does not necessarily mean that the 26 are right.