Russia gives blankets to Kosovo Serbs instead of citizenship 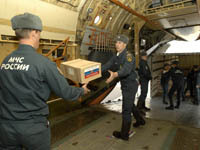 Russia provided an original response to the Kosovo Serbs who asked Russia for citizenship in a desperate attempt to find at least some protection from the Albanian militants. Instead of Russian passports or military assistance Russia sent to northern Kosovo blankets and food.

On December 7 a convoy of 25 cars of MOE Russia set off to the Balkans from the city of Noginsk located in Moscow region. Residents of northern Kosovo, where Serbs still prevail, will receive mobile power plants, blankets, food, utensils and field furniture. The total weight of the aid package is 284 tons. If everything goes as planned, the convoy will arrive at the north of Kosovo on December 12.

Note that this is not the first delivery of Russian humanitarian aid to the north of Kosovo. In November the IL-76 of MOE brought to the airport of the Serbian city of Nis food, compact stoves and utensils weighing 36 tons.

The story of 1999 comes to mind when Serbia was bombed by NATO aircraft. The Russian Emergency Ministry has sent a batch of humanitarian aid to the country. The delivery was not without adventures. Hungary, Romania and Bulgaria closed their airspace to the Russian humanitarian aircraft. The reason was clear as the former just entered NATO, and the other two were striving to get there. Eventually, the cargo was delivered to Serbia via ground. The trucks were sitting at the Ukrainian-Hungarian and Hungarian-Yugoslav border for a long time, but eventually arrived at the destination.

But is this aid sufficient? The climate in Serbia is not that bad and they can grow food in their gardens. What Yugoslavia needed then was the weapons. Its sky was practically bare, and S-300 would come very handy. But the Serbs only shot down a couple of U.S. drones and seized three American soldiers in Kosovo. In addition, none other than Viktor Chernomyrdin persuaded Slobodan Milosevic to withdraw troops from Kosovo.

In addition, at the same time there were talks about the inclusion of the Federal Republic of Yugoslavia into the Union State of Russia and Belarus. This idea was not put into practice. If it were, then a Russian military base could have been placed in Serbia and even in Kosovo. Would NATO bomb Yugoslavia with impunity if this had happened? So far the Western military choose not to get involved in a direct clash with Russian troops.

In 1999, the Serbian army left Kosovo after 78 days of bombing. Many remember the transfer of Russian paratroopers from Bosnia to Pristina, the administrative center of the area, and deployment at the local airport. However, the military did not have enough food and drink, and were forced to surrender. In addition, Boris Yeltsin did not use this trump card in the negotiations with the foreign leaders at the summit of the G8.

As a result, Russia has received its sector of responsibility in Kosovo. The area was divided into American, British, French, German and Italian sectors. The real power was in the hands of Western-backed militant Kosovo Liberation Army (KLA). Serbs were massively squeezed out of the province. Many were killed on the first day of the return of the Albanians.

The Russian military is still located in the province, but they do not have a leading role. Given that fact, the Russian government in 2003 decided to withdraw its troops. Meanwhile, as soon as it happened, the process of separation of the area from Serbia became irreversible. While the Russians were in Kosovo, the West and the local Albanians did not dare doing this.

March 17 of 2004 will be remembered as the Kosovo "Crystal Night". With the connivance of the Western peacekeepers Albanian pogroms of Serbs and other non-Albanians began. Dozens of people were killed and thousands fled. Albanians burned down dozens of Orthodox churches many of which were on the UNESCO list. The West provided no legal assessment of those pogroms. Would the massacre have happened if Russian peacekeepers were stationed in Kosovo?

Since the Russian peacekeepers were gone, the legal mechanism of separation from Serbia was launched. In 2006, a plan was presented by the UN special envoy Martti Ahtisaari. A year later, the "election" organized by the West was won by the party of the commander of the KLA Hashim Thaci, who has been since accused of organ trade. Finally, on February 17 of 2008, the U.S. and leading EU countries have launched the procedure for recognition of independence.

However, the issue was not fully resolved. In the northern parts of Kosovo Serbs still account for the majority of the population. They flatly refuse to obey the Albanian authorities in Pristina. Finally, the West got fed up. Germany and Austria sent their peacekeepers to support the Albanians who tried to seize the checkpoints "Yasmin" and "Brnyak" and thus cut off part of Serbia from the main northern Kosovo. This ended in a big fight with dozens wounded.

Would this all have happened had Russia remained in the province? At any rate, the Serbs address their main claim not to Russia but their own leadership. Was it Milosevic who let down the Croatian and Bosnian Serbs at the time? Was he paying too much attention to the relations with the West? Was it he who failed to purchase the necessary weapons from Russia, although he was offered to do so? Was it him who finally withdrew the troops from Kosovo, leaving his tribesmen?

There is no discussion about President Boris Tadic. While the Serbian government has not recognized Kosovo's separation, no real protection of Kosovo Serbs was provided. At the time when the western peacekeepers were beating up the Serbs on the border of Kosovo and the main part of Serbia, the authorities in Belgrade did not move a finger to send security forces there. Calls to the West to stop beating were not heard by anyone there.

Once in this situation, the Kosovo Serbs began to seek support from Russia. Over 20 thousand people signed a petition requesting Russian passports. However, their request was denied as the law on citizenship of the Russian Federation does not allow it. Russia limited its aid to generalities of support and humanitarian assistance that will not change anything.

Russia's behavior is hardly surprising. Residents of CIS countries are waiting in line for years before they are given a passport with the two-headed eagle. In this case Russia was addressed by over 20 thousand people at once. Why would it eliminate the bureaucratic hurdles for its Orthodox brethren who are about to be cut out if it cannot do it for its own countrymen?

The question to the Serbian government is in part a question for Russia. The West has openly endorsed Tadic. Did Russia have its own candidate? Who did it support? If Russia had supported someone, the Serbs might have voted for that person, and a Russian military base would have appeared near the border with Kosovo. Distributing Russian passports to Kosovo Serbs, Russia would have secured the right to protect them as its own citizens. Russia does not have its people in the Serbian leadership and the West does. The result is the current events in Kosovo. Russia once again appears in a negative light.

In 2003 Russia left the Balkans, and five years later a war broke out in South Ossetia. There is a looming prospect of extending NATO membership to Ukraine. After leaving the distant borders, the native land of brotherly Serbian people, Russia obtained a problem on its own borders. Or course, Russia will be thanked for the humanitarian assistance. However, it will be other, far more decisive measures that would help reverse the situation. In the meantime, the Balkan Peninsula is being rapidly drawn into the orbit of the EU and NATO, and Russia is being squeezed out as unceremoniously as the Serbs from Kosovo.