CELAC: A message from those not present 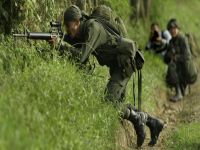 The Summit of Caribbean and Latin American States (CELAC) currently underway in Venezuela, does not take into account the ideas and ideals of the force which controls half of Colombia and which constitutes a State in the areas it controls - FARC-EP, a political organization with a military wing. Straight from the Mountains of Colombia, their message...

PRESIDENTS AND PRIME MINISTERS OF THE REPUBLICS

The important meeting you are celebrating, with the purpose of giving birth to a formal Community of Latin American and Caribbean States, constitutes an important event.

The Revolutionary Armed Forces of Colombia - People's Army, FARC-EP, salute you, expressing our desire that this initiative becomes the starting point of an effort which guides the Latin American and Caribbean nations towards unity taking into account the fundamental Bolivarian aspects and ideals.

Severe contingencies threaten today not only the future of our continent living in suffering, but the entire planet and mankind as a whole. Mother Earth claims for urgent action to stop the environmental disaster, blowing winds of nuclear war, the world economy is stagnating and old interests, in their sole benefit, impose the burden on the people to save themselves.

Here is the significant meaning of the Latin American and Caribbean unity, taking together a path towards the new world that the Old Continent and the North American Empire always vetoed and did not allow us to have. We take this opportunity to express our deep concern for peace in Colombia, which is the peace of the Continent.

The characteristic trait of its persistent ruling class has been a strange and atavistic inclination to solve social and economic conflicts through violent levies. None of the long and cruel dictatorships in the past which certain nations brought to this hemisphere in the past, created such appalling numbers of victims as were generated by the Colombian regime in recent decades.

This explains the dimensions of the current armed conflict in Colombia whose conclusion seems to be indefinitely prorogated in time. Peace will never be the result of humiliating surrenders which contribute even more towards those responsible for this national tragedy holding on to power, and we shall never exchange anything which allows things to remain as they are.

A dialogue with full guarantees, facing the country, the continent and the world, with popular participation, that models an institutional and political recomposition, which opens the floodgates to the profound democratic reforms, is the formula that we have repeatedly proposed that FARC aspires to and hopes to become a reality very soon.

Recent events, contrary to the rumoiurs whispered in the side-wings, reveal that the Establishment in Colombia has a zero desire to consider our position. Instead of engaging with us, they insist in their perfidious accusation of us being drug traffickers and terrorists, an excuse that guarantees the unconditional U.S. support, in addition translated into a growing military and political interference, very convenient to the strategic interests of domination of continental and world power.

In the words of President Santos if we do not surrender, what awaits us is the prison or the tomb. His offer of rewards in millions of dollars for the heads of the guerrilla commanders, recalls the uses of European Crowns against rebellious Indians and black slaves.

We do not believe they dared to think that in these new times that are born in Latin America and the Caribbean, the people would celebrate as a great victory a political solution in Colombia.

Our patriotic and Bolivarian embrace to this truly New World that shouts Enough! and intends to walk on without anyone being able to stop this gigantic March of Peoples.

Central Secretariat of the Staff of FARC-EP