Belgium beats all records of anarchy 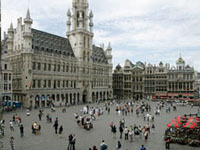 No less than a historical event took place in Belgium. After 535 days after the election representatives of the parties of the Flemish and Walloon communities finally agreed to establish a new government. The country should cease beating the records of anarchy that it was "successfully" engaged in for the entire outgoing year. However, the threat of a new crisis and the collapse of the country housing the headquarters of the EU and NATO have not gone away.

The saga began in June of 2007. Then at the elections in the northern and the most prosperous parts of the country of Flanders nationalist and separatist parties gained nearly 30 percent of the vote. The winner was the Christian Democratic Party headed by Flemish Yves Leterme. He did not speak of the decay of the country directly, but once admitted that the Flemish and French-speaking Walloons were "united only by king, beer and soccer."

Flemings make up over half of the population, so the prime minister nearly always is a representative of this ethnic group. The problem is that the ruling coalition of Belgium should include representatives of both the Flemish and Walloon communities. This proved to be problematic. Representatives of the poorer Wallonia categorically rejected the demands of Leterme to reduce allocations from Flanders to the Belgium budget.

The first government crisis lasted until March of 2008. Walloon politicians still accepted Leterme as their prime minister. However, in the next two years the government has been repeatedly reshaped. For some time it was headed by the current EU president Herman van Rompuy, then again the reins of government were given to Leterme. All this time the Flemish-Walloon disputes have been ongoing. Now the prime minister demanded that the division of one of the districts of Brussels into the Flemish and Walloon parts. Francophones were against it.

Tired of the endless squabbling, King Albert II appointed snap election on June 13, 2010. This proved to be a wrong thing to do. First place in Flanders was won by the party "New Flemish Alliance" led by Bart De Wever. This politician has repeatedly openly talked about the possibility of the collapse of Belgium. Nationalist and separatist parties received a total of 45 percent of the vote. The King had no choice but to mandate De Wever to form a new cabinet.

De Wever was even more uncompromising than Leterme. He defended the idea of ​​conservation of more money in the regions that did not satisfy the Walloons. "Belgium is no longer functioning. Belgium is a failed country," stated the candidate for the prime minister. Decadent mood prevailed in the country of the Walloons as well. "You can no longer ignore the fact that this (independence) is wanted by the majority of the Flemish population. Therefore, we must prepare for the end of Belgium," said the Walloon Socialist Laurette ONKELINX.

Seeing that De Wever is categorically not liked by the Francophonie, the King delegated the mission to form a cabinet to the leader of the Walloon Socialists Elio di Rupo. But the Flemings were not happy with this turn of events because since 1974 only their representatives were prime ministers. In addition, di Rupo only partly could be considered a Francophone. He comes from a family of Italian immigrants, and the level of hostility towards people from other countries in Flanders is one of the most significant in Europe. Di Rupo is also a homosexual, which even for the "advanced" Belgium is too much.

As a result, the king was going back and forth between de Wever and di Rupo, but every time the attempts to form the government were unsuccessful. Meanwhile, the Belgian government crisis was registered in the Guinness Book of Records. The country was way ahead of record-holding Iraq that last year lived without a cabinet for 289 days. First, it was 300 days, then a year. Finally, in late October, Belgium celebrated a "glorious" anniversary: ​​500 days without a government.

All this time, Yves Leterme remained the Acting Prime Minister. In terms of actual anarchy he did everything possible to prevent the economy of Belgium from a collapse. It did not suffer as Greece or Portugal, but a political crisis after all crippled it. In November, the rating agency S & P downgraded Belgium's sovereign credit rating by one notch from AA + to AA. The public debt reached 96 percent of GDP. Because of the differences between the Flemish and Walloon parties Belgium could not pass a budget. The country was threatened with the EU sanctions as the EU requires all its members to accept the basic financial statements.

Only once in the corner, the Flemish and Walloon politicians finally managed to negotiate at least something. On November the country's budget for the next three years was adopted, involving cuts in public spending and deficit reduction from 4 to 2.8 percent. On November 30 following the economic trade-off a political compromise has been reached. Six parties representing both communities will create a cabinet of 14 ministers - equally from the Flemish and the Walloons. The cabinet will be headed by the earlier "rejected" Elio di Rupo. The winner of Flemish elections De Wever will not be in office.

After 535 days, Belgium has found the government. Its nominal composition is to be adopted in the coming days. The problem of disintegration of the country seems to have been solved. But how long will this solution last? So far, the Flemings and Walloons have agreed only on the parameters of the budget for the coming years, and largely because of the reluctance to come under the penalties of the EU. The question of future organization of Belgium has still not been resolved.

Though the Flemings make up just over half of the population   the first language of Belgium remains to be French. It is spoken by nearly all the representatives of the Flemish community, but that many Walloons do not speak it. Immigrants that make up more than one tenth of the population speak French, but virtually none of them speak Dutch. Naturally, this situation is frustrating for the Flemish and fuels separatist sentiments.

This was somewhat justified when, thanks to the development of coal mining region, Wallonia was the main donor. However, after 1945 the economic center has moved to Flanders, where there are new high-tech industries. Today it provides the bulk of revenue of the Belgian budget. The current crisis has only reinforced the reluctance of the Flemish to share with Walloons. But old grudges (language and others) only increase this reluctance.

Belgium has existed since 1830 and for many years was a unitary state. However, with increasing influence of the Flemish by the end of the twentieth century they managed to achieve its transformation into a federation of Flanders, Wallonia and Brussels. Many politicians openly suggest that they are not going to stop there. They want to leave more money in Flanders and share the Francophone districts.

The current unprecedented long governmental crisis in Belgium is coming to an end. But in the absence of a solution to the country's most basic issues of relations between the two communities the cabinet could fall at any moment. The headquarters of the EU and NATO located in Brussels are going to observe the situation.

Ironically, on the verge of collapse is the country whose capital is also the capital of the united Europe. However, this is not yet a collapse. So far, the separation is strongly supported by nearly a third of the Flemish and almost no one in Wallonia, therefore, the situation can be remedied. But if the compromise between the politicians from the two communities is not found there may be a new border running through Brussels.