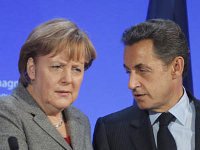 December 1 marked two years from the date of entry into force of the founding document of the EU - Lisbon Treaty. It was designed to deepen the European integration, but in practice some European countries are arguing among themselves literally about every detail.

The document was difficult from the very inception. In 2005, the referendums in France and the Netherlands rejected the EU Constitution that practically made the EU into a monster with a common flag and anthem. A replacement was urgently developed. As a result, on December 13, 2007 in the capital of Portugal a new document was signed named the Treaty of Lisbon.

Mentions of the flag and coat of arms were removed, but the position of the President and Minister of Foreign Affairs of the EU prescribed by the European constitution did not disappear. Individual countries have lost their right to veto EU decisions - now such right was only granted to a group consisting of at least four countries. The principle of "one country - one commissioner" was gone. The number of members of the European Commission is now smaller than the number of the countries of the EU.

The ratification of the document was painful. The UK and Poland had complaints about the document. The only country to hold a referendum on the adoption of the Treaty of Lisbon was Ireland. In the summer of 2008 came a blunder when "the Celts" voted against it. Their choice was changed more than a year later, when their country fell into debt. Without the help of the EU it would not get out. The Irish had to sacrifice their principles.

The last obstacle was the Czech president Vaclav Klaus. He feared that in case of the entry of the document into force his country would lose its sovereignty and face certain circles in Germany and Austria willing to reconsider the results of the Second World War and present material claims to the Czech. Only upon receipt of the appropriate assurances from the EU Klaus signed the document. At the same time he declared that the Czech Republic now would lose its independence.

Perhaps there is no single topic where all EU member states would be united. A textbook example is saving of Greece that has fallen into debt. First Germany was reluctant to help, and then - Slovakia. Reproaches to the "idle" European Union were made by the UK and the Czech Republic. In addition, there is a need to help Hungary and Latvia that are not part of the Eurozone but also strongly affected by the crisis. What would happen if 40,000,000-strong Spain and especially Italy with 60,000,000 people find themselves on the verge of collapse?

There was expulsion of Bulgarian and Romanian Gypsies from France that caused an all-European scandal. Netherlands and Finland opposed the entry of Bulgaria and Romania into the EU. France did not accept immigrants from Tunisia who wanted to get there trough Italy. Denmark completely rebuilt its border controls. The list of all the differences that are clearly inconsistent with the spirit and the letter of the Lisbon Treaty can go on.

It has been only two years, and Germany and France already want to make changes to the document in order to create a "financial government" and strengthen fiscal discipline in the Eurozone. Polish Foreign Minister Radoslaw Sikorski openly suggested that Germany officially heads the European Union. Latvian Defense Minister Artis Pabriks would agree to a European federation with Germany at its head. The Treaty of Lisbon has no such provisions.

Why is the Lisbon Treaty not working? Alexander Rahr, German political scientist, Director of the Center of Berthold Beitz of the German Council on Foreign Relations shared his thought in an interview with "Pravda.Ru."

"What is happening today with the Lisbon Treaty?"

"It was simply forgotten. Within the last two years the European Union has changed a great deal. Could you compare Russia of 1989 and Russia of early 1992? The situation is the same with Europe."

"Was it a hasty decision of the Europeans to adopt this document?"

"Unfortunately, it is not worth the paper wasted on it and the suffering that accompanied its ratification. All countries except Ireland refused to bring the document to a referendum and voted in the parliament. The EU had to twist the arms of the Irish and then the Czech President Klaus. The European idea is a very good idea, but in its current form it scares people. They do not like a large bureaucratic Europe. They do not want to strengthen the sub-national structures that are not elected by anyone, they do not want the United States of Europe."

"Today there are open discussions about the reform of the European system; Germany is called to officially accept the burden of leadership. Should Germany accept such an offer?"

"The Germans are generally not liked in Europe, and other countries are apprehensive of giving them prominent roles. When the issue of the unification of Germany was discussed, Germany was required to actually feed others within the framework of the united Europe. The Germans agreed, because it is very important to build a strong united Europe. It is not a good life when from the East Poland looks askance, and from the West - France that Germany had been fighting with for a thousand years. The UK clashed with Germany now and then as well. If earlier Italy, Spain, and Portugal continually criticized the "workaholics" of the Germans, now they look at them as saviors. This chance must be used. Then Germany (but not alone, together with France) is most likely to meet their interests."

"Is German elite ready for this?"

"If the current German elite thought strategically, it would have be ready, but I doubt this is the case. Today, the country's leadership is not able to think strategically. Germany is likely to miss its chance and give authority to irresponsible European bureaucracy in Brussels that incidentally gets paid twice as much as compared with the ministers of national governments."

"What could be the future of the Lisbon Treaty?"

"In 2012 it is unlikely to be effective. Actually, next year could be critical for the EU, the most difficult in all the years of its existence. Germany and France will try to negotiate a new treaty involving greater centralization in financial matters. Yet, it is hard to predict whether they will be successful. There is great uncertainty because of the situation in Greece.

Next year will have to answer the following question: Do we want this Europe? Or would we have to go back to nation states? Full return to the practice of purely national states would be impossible, even though the British try to stay away from political integration, limiting with the economic one. We shall see what happens. The situation is extremely unpredictable at the moment."