The rise of Qatar and the fall of Gaddafi 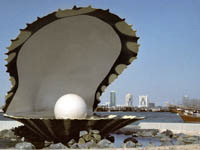 The year 2011 can be called "the year of Qatar." The events in Syria and Libya are particularly clear demonstration of the emergence of new regional powers, whose names until recently were not familiar to ordinary people.

The overthrow of Gaddafi led to a radical change of the situation in Africa. Considering that in February of 2011 another foe of Qatari Mubarak fell, nearly no former rivals of Qatar are left in the struggle for Doha's interests in the countries of the Black Continent.

It became quite clear that the Qatari emir played a key role in the collapse of his old enemy al-Gaddafi. Of course, several hundreds of Qatari military personnel would have been unable to break down the Colonel without the aid of NATO air. In terms of the number of the armed forces Qatar is one of the smallest countries in the region. Of far greater importance was the information and financial support for the rebels that played a very important role in changing the Libyan authorities.

Qatari Emir is now actively trying to overthrow another media of Arab socialism ideas - Syrian President Assad - following the Libyan example. The NATO aggression against Libya was preceded by a suspension of its membership in the League of Arab States (LAS). Further Doha was one of the main areas for developing the strategy of Gaddafi overthrow. It was here that the change of strategy and tactics against Libya was discussed after Colonel regime has demonstrated survivability. This has made Qatar one of the main centers of information warfare against Gaddafi.

Qatar is trying to implement a very similar scenario with regard to Syria. It is most vocal about the massive violations of human rights in this country and in fact, is trying to take over the implementation of anti-Syrian initiative. The personal activity of His Majesty is very telling. If needed, he does not shy away from visiting Damascus to give the ultimate order to put forward initially impossible stipulations for Assad and then organize a flagging in LAS. In many ways, this demonstrates the importance of tiny Qatar among the Arab countries and creates the appearance that it it this country that sets the tone in the region.

It is significant that these actions are very successful. Surprisingly, even those countries that had difficult relationship with the Qatari emir, such as Algeria and Sudan, are dancing to his tune.

In addition, with his actions Qatar clearly outshines Saudi Arabia that traditionally considered itself the undisputed leader not only in the region, but generally in the Arab world, and used its ties with Iran tested over the years.

In contrast to the Saudis, he is not limited to conducting subversive activities through the creation of special funds for "educational" and other funds for Wahhabi cells. To promote its interests Qatar is actively using not only the proceeds from the sale of energy resources, primarily large natural gas cash reserves, but also such modern media as television. In this sense, the creation and subsequent promotion of a television channel "Al Jazeera" gave the Qataris a significant trump card to achieve results by means of information warfare. What we saw in Libya, of course, suggests that the Qataris surpassed their Western "teachers", including CNN, in this skill.

The most interesting point, however, is that the West, using Qatar as a bludgeon for achieving its goals in Libya, is facing a risk of getting a quite different result. Qatar is now seeking to consolidate the results of the victory that cannot but worry the West. When after the death of Gaddafi his opponents began dividing the power, the Qatari emir tried to take a grip of the situation despite the fact that it is against the interests of France with which it has strong economic ties.

The French, just like the rest of the West, bet on the "liberal" PNS, while Qatar is betting on the Islamists. Doha continues to fund and supply the weapons to Libyan Islamists who are already beginning to prevail in Libya.

Furthermore, the Qataris openly interfere in the process of forming executive bodies of the country. It is no longer limited to the promotion of their henchmen to key positions (this is clearly demonstrated by the success of the members of the municipality of Tripoli), but the instructions on how and what to do next. This causes obvious irritation in the PNS. The "main liberal" of the country Tartuni Ali told Qatar that "before entering the house, one should knock on the door."

Obviously, the emir cannot completely ignore the interests of the West that is largely a guarantor of Qatar's security. However, he clearly did not intend to fully comply with the "wishes" of Sarkozy. Indeed, in the first place, in this case we can talk about interdependence. Second, the parties would clearly not fight before the time when the destiny of Syria is at stake.

As for what will happen later, Qatar is clearly in a more advantageous position in Libya than France. This goes beyond the fact that the Qatari emir in words can promise them anything but in fact continue to tacitly support the Libyan radicals. The NATO operation there ceased, while hundreds of Qatari military continue to be stationed on Libyan soil and exert considerable influence on the developments in that country.

The Qatari example disproves the old belief that the main indicators of influence of the country are the size of its area, population and power of the armed forces.