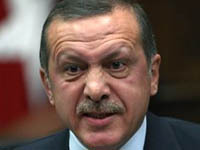 An epoch-making event took place in Turkey. For the first time since the establishment of the Turkish Republic, its prime minister officially apologized for mass killings of the Kurds. At the same time, the Turkish police conducted a raid against the Kurds. What stance does Turkey have on this issue? Will the country recognize the existence of the national minority on its territory? It goes about as many as 20 million people.

The Kurdish issue has been the talk of the day for Turkish politicians this week. The leader of the largest opposition Republican People's Party (CHP) Kemal Kilicdaroglu called upon the Prime Minister and the leader of the ruling Justice and Development Party, Recep Tayyip Erdogan, to clear out the question about the events that happened more than 70 years ago.

Representatives of the Kurdish community both inside and outside Turkey have been striving for apologies for the events of 1936-1939 for a long time already. The Kurds organized a rebellion during that time. The Turkish army killed as many as 14,000 people and wiped many Kurdish villages off the face of earth. The residents of those villagers were relocated to other regions of the country.

Until recently, the Turkish authorities refused to apologize for those actions. Erdogan acted differently. "If there is a need for an apology on behalf of the state, if there is such a practice in the books, I would apologize and I am apologizing," he stated. However, he stated that his political opponents from the above-mentioned opposition party (CHP) were staying in power during the tragic events. Opposition should apologize too, Erdogan believes.

Kemal Kilicdaroglu preferred to keep silence in return. CHP Diyarbakır Branch Chairman Muzaffer Değer said Erdoğan did what the CHP should have done by apologizing for the Dersim massacre on behalf of the Turkish state. Deger lost his position as a result of those remarks. CHP Deputy Chairman Gürsel Tekin stated, reacting to Erdogan's apologies, that the prime minister had "put dynamite under the basis of unity of our nation."

The issue of the national unity is the main problem that Turkey has. The Kurds regularly remind of this problem with the help of terrorist acts and killings. The Turkish army responds with violence too. This undeclared war ahs already claimed over 40,000 lives, but the war is not going to end. The Kurds want to have their own independent state, in which they would inhabit the territories of Turkey, Iran, Iraq and Syria. Turkey does not want to hear anything about it.

When Mustafa Kemal Ataturk founded the Turkish Republic on the ruins of the Ottoman Empire in 1923, the country took the French principle as the basis of the national policy: "All citizens of France are French." This principle is far from reality even in France, which is populated by the Corsicans, Alsatians, Bretons, and Basques. "All citizens of Turkey are Turkish" does not match the real state of affairs either. Even when Balkan and Arab states separated from Turkey, the country remained a multinational state anyway.

The Kurds became the largest national minority in the Turkish Republic. Like the Turks, the majority of them practice Islam, but their language belongs to the Iranian group. The province of Kurdistan existed in the Ottoman Empire from the middle of the 19th century till the collapse of the empire in 1918.

The Turkish authorities still deny the territorial autonomy right for the Kurds. The Kurdish writing system on the base of the Latin alphabet is banned. Children are not allowed to have Kurdish names. Road signs with the names of settlements on them must be written only in Turkish. The Kurdish language does not have any status. The language is not used in schools and colleges. Before 1991, it was even forbidden to sing Kurdish songs. The number of Kurdish people living in Turkey is hard to determine. It varies from 7 to 20 million, which makes up from 10 to 30 percent of the Turkish population. The Turkish laws do not recognize the existence of the native non-Turkish population.

The first Kurdish rebellion took place in 1925 and then repeated in 1929. The rebellion in Dersim, for which Erdogan decided to apologize, was one of the bloodiest. It was a massacre.

The Kurds have conducted a number of terrorist acts since that time. They attacked and killed many Turkish military men and police officers. Turkey responded with bombardments. The Kurdish issue has become even more serious now because the Kurds in Iraq received autonomy after the collapse of Saddam Hussein's regime. Consequently, the Turkish army has entered the Iraqi territory on a number of times to suppress the Kurdish resistance there.

One may not say that the Kurds have been thrown out of public life in Turkey, though. Turkey's second and eighth presidents (Mustafa Ismet Inonu and Turgut Ozal) were of Kurdish origin. It is worthy of note that Ozal agreed on truce with the Working Party of Kurdistan on April 15, 1993, but then suddenly died two days later. The pro-Kurdish Peace and Democracy Party is represented in the parliament. However, The Turkish Republic has never recognized the Kurds officially.

How do other countries treat the Kurdish issue, especially the European Union, on whose doors Turkey has been knocking since 1982? The Working Party of Kurdistan is considered to be a terrorist group in the West. However, there are millions of Kurds living in Europe. Turkey has to ease its pressure on the Kurds and provide national rights to them to become a EU member.

The words from the Turkish Prime Minister have removed a heavy taboo from the discussion of the Kurdish issue on the top level. However, the attitude to the Kurds has not changed a bit. It is easy to understand Turkish officials. If the Kurds are recognized as a national minority, Turkey may lose nearly a quarter of its territory.