Spain: Big challenges of former mistress of the seas 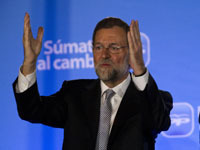 Spain that found itself nearly on the verge of default saw a change of the government. At the election the victory was scored by the opposition People's Party, whose leader Mariano Rajoy will become the new head of government. The results of the Spanish election confirmed a recent European trend: the power would almost certainly change during the crisis. Spain faces both global and specific local challenges.

According to the results of the elections to the Cortes Generales (Parliament) of Spain, the opposition conservative Popular Party won 44.62 percent of the votes. This enabled it to win the absolute majority of seats - 186 of 350. Accordingly, the new head of government will be Conservative leader Mariano Rajoy. Now the former ruling Socialist Workers Party has secured 28.73 percent of the voters and won only 110 seats.

"I have to lead the country in the most difficult period in the last 30 years of its history, and I want to urge all citizens to join Spain to take the country out of the crisis. The country has no other enemies except for unemployment, budget deficits, excessive debt and economic stagnation", Rajoy said in his post-election speech. According to the new Prime Minister, the cabinet will focus on targeted support for the most affected sectors of society - pensioners and the unemployed.

Rajoy has a difficult legacy. Two years ago, all the leading international rating agencies placed Spain on the PIGS list (Portugal, Ireland, Greece and Spain) comprised of the countries that are mostly in danger of falling victims of the debt crisis. Later, this group was joined by Italy. Greece, Portugal and Ireland have already been forced to resort to multi-billion dollar assistance from the EU and the International Monetary Fund (IMF).

To date, the main challenge of nearly 40,000,000-strong Spain is unemployment. Five million of the country residents or 21.5 percent of the workforce are unable to find work (the average number for the Eurozone is 10 percent). The situation seems not as critical as in Greece, where the level of public debt exceeded 100 percent of GDP. In Spain this number is "only" 60 percent, but to achieve it had to resort to harsh measures.

The previous government of Socialist José Luis Zapatero's in recent years has reduced public sector wages and raised the retirement age, but the economic growth in Spain is still nonexistent. Besides, analysts predict a large-scale banking crisis, and repayment of debts to credit institutions will take dozens if not hundreds of millions of euros. Is it no wonder that the Socialists had no chance of winning.

However, Rajoy will have to continue the policy of unpopular measures. Spain has assumed an international obligation to keep the budget deficit at the level of at least 4.4 percent (the Eurozone requires it to not exceed three percent). To accomplish the task, the new government will have to cut budget spending by at least 17 billion euros. Social costs (for example, pensions will have far less than the current 120 billion euros) and the cost of the state apparatus will be reduced.

These measures are unlikely to produce a long-term effect. The weak spot of the Spanish economy is its relatively low development. Although its total volume is the fifth in Europe and 12th in the world, not a single Spanish company made the list of the hundred leading global brands. While Chupa Chups candy or Spanish wine (Sherry and many others) are known outside the country, the foundation of the economy is high technology and a powerful industry. This presents a problem for Spain.

The country earns a great deal on foreign tourists. In terms of this indicator, Spain consistently ranks among the three world leaders. However, the income from visiting the beaches of the Canary and Balearic Islands, Barcelona or Seville attractions is not able to fully cover the costs of the pension system, year-end bonuses, mandatory siesta and other costs of Spanish life. There is a need to create new industries. Yet, would Germany and France allow this? Do they need competitors?

The surplus of labor has always been a problem for the country. Millions of Spaniards immigrated to America, are settling in Mexico, Argentina and other Latin American countries. Approximately the same number has settled in France. Today, nearly every tenth Frenchman has a Spanish last name.  Hundreds of thousands of Spanish residents are traveling to Germany or Switzerland. Today, Germany is ready to take hundreds of thousands of Spaniards instead of Turks and other immigrants from Asia. But will it save Spain in the long run?

Spain has problems not only with the economy but also with the national issue. More than once in the history of the country the economic turmoil intensified separatist movement. Two years ago at a consultative referendum the majority of the residents of Catalonia (the most developed area of the country) voted for independence. A year ago at the local elections Catalan separatists won and formed a regional government.

The coming to power of the People's Party may exacerbate the national issue. Unlike the socialists, conservatives stand for maximum centralization of Spain and speak against concessions to the Catalan, Basque, and Galician nationalists. But if the danger of separatism in the relatively poor Galicia is low (especially given that the new Prime Minister Rajoy is Galician), Catalonia and the Basque Country wealthy by the Spanish standards are not the case. The Increase of the tax burden on these areas by Madrid could trigger an explosion of nationalism.

In general, the results of the elections in Spain confirmed the Europe-wide trend of the last year. Throughout Europe the current governments unsuccessful in combating the crisis were defeated and forced to leave. This happened in Greece, Portugal, Ireland and Italy that found themselves in the same debt situation as Spain. This was the case in more prosperous Denmark and Eastern Slovenia. In France and Germany the ruling party is losing local elections. Poland is the only country where the current Prime Minister Donald Tusk has won. However, he is coping with the crisis better than anyone else in Europe.

Now we have to wait and see where else in Europe the power will change. We will also have to wait and see whether the government of Rajoy will be successful in moving Spanish economy to a more high-tech track. Otherwise this 40,000,000-strong country and the former mistress of the seas will continue to be affected by the slightest whiff of the crisis breeze.