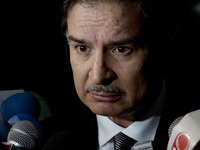 Guatemalan authorities have consented to giving their former President Alfonso Portillo who was found guilty of money laundering to the U.S. This Central American country confirmed the status of a "banana republic" as major decisions for this seemingly independent nation are made in Washington. Incidentally, in the recent past the U.S. committed heinous crimes on the territory of Guatemala.

Alfonso Portillo in 2000-2004 served as the President of Guatemala and during his four-year time "excelled" in cases of corruption. Fearing imprisonment, he fled to neighboring Mexico, but in 2008 the latter gave him to Guatemala. At home he was accused of embezzling $15 million from the budget of the Ministry of Defense. It was decided to release the politician on bail, but he fled to Mexico again. Finally, in early 2010, he was brought to Guatemala again, but this time at the request of the United States.

U.S. law enforcement authorities believe that the former Guatemalan President is guilty of laundering $70 million from charities and the public treasury through U.S. banks. Subsequently, the funds were transferred to the accounts belonging to relatives of Portillo in Europe and Bermuda. In the spring of this year in Guatemala the charges of embezzlement and corruption have been removed, but the U.S. extradition request remained in force.

Despite the fact that in most countries there are rules prohibiting the transfer of its citizens for trial in another country, Guatemala does not follow this rule. First Criminal Court, then the Constitutional Court, and then acting President Alvaro Colom agreed to send Portillo to the United States. It turns out that Washington's will is above the country's sovereignty. However, at a glance at the history of the US-Guatemalan relations, the surprise factor of this behavior of the authorities of this Latin American country disappears.

The name "banana republic," which means a country whose entire economy is dependent on the export of tropical crops to U.S. companies, and whose policy is coordinated with Washington, is very suitable for Guatemala. The U.S. penetration in this country began in the 19th century. Before the Americans settled in Guatemala, its main export commodity was coffee. Thanks to the "guests from the North" bananas became another export commodity.

In 1898, a conservative politician Manuel Cabrera became the President of Guatemala. He gave the American company United Fruit vast lands, on which the banana plantation were grown. Gradually the "guests" expanded ports in the Caribbean and Pacific coast of the country to make it easier to export goods abroad. Nearly all of the revenue flowed into the United States. Something settled in the pockets of Guatemalan leaders, while the people did not see any of it.

In 1920, the "benefactor" Cabrera was deposed. The power struggle continued until 1931, when a protégé of the United States General Jorge Ubico became the President. He gave the new United Fruit new lands free of charge where Guatemalan laborers worked for pennies. In 1944-1945, Guatemala has experienced a series of military coups, until a writer Juan Jose Arevalo became the President. He did not infringe upon the dominance of the American companies, but his policies have become a little more independent.

Recently, an American professor Susan Reverbay revealed the horrific facts of experiments that the Americans conducted in Guatemala in 1946-1948 during the presidency of Arevalo. With the permission of the authorities of Latin American countries "visitors from the north" carried out medical experiments on Guatemalans. Doctors from the United States infected over 1,300 residents of Guatemala with various sexually transmitted diseases. With the funds allocated by the White House, they wanted to test on human beings whether penicillin was able to prevent infection with syphilis.

The experiments were conducted without the consent of Guatemalans - they were told that they were getting vaccinated. The result was deplorable. At least 700 people were infected with syphilis and gonorrhea, 83 were killed. The United States recognized the fact of such experiments only in 2010. Barack Obama has apologized to his counterpart Alvaro Kolomu. Today some of the survivors and descendants of the study participants who died from the experiment are trying to obtain compensation from the Americans, so far to no avail.

By 1951 the United Fruit felt at home in Guatemala. However, the presidential election was won by Jacobo Ahrens. He refused the demand of the U.S. to send Guatemalan troops to the front of the Korean War. Under his presidency the influence of leftist parties increased. However, the main development was his decision to nationalize the land of the United Fruit, paying the company a million dollars. The company, however, insisted on 16 million.

The entrepreneurs failed to come to an agreement with Ahrens on good terms and began to seek support of the United States. President Dwight Eisenhower and brothers Allen and John Foster Dulles, one of whom was a director of the CIA and the other one Secretary of State, joined the pressuring campaign. In April of 1954 they demanded that Guatemala returned the United Fruit $15.8 million, and Ahrens agreed only to $594,000. As a result, the U.S. decided to conduct a military operation to oust the intractable President that went down in history as "Operation PBSUCCESS".

"Contras" groups led by Castillo Armas trained in the United States were brought to the territory of Guatemala from neighboring Honduras. The rebels kept in touch with the American authorities. The airplanes of "Contras" that bombed Guatemala City were likely operated by the American pilots. Ahrens chose to abdicate and gave the power to the commander in chief of the armed forces Enrique Diaz under the obligation to continue to fight the rebels. However, subordinates have committed treason and, abetted by the U.S. overthrew Diaz.

As a result, the leader of the mercenaries Armas became the new President. He returned all the land to the United Fruit, removed 70 percent of the population from the election process and created a Committee for the Protection from the Communism. Massive repressions were deployed in the country with the full approval of the United States. Meanwhile, former CIA Director Walter Bedell Smith, head of the United Fruit, felt like a complete master of Guatemala. In 1957 Armas was assassinated, but nothing has changed in terms of the U.S. influence.

Tired of the dominance of the U.S. and United Fruit, in 1960 a group of junior officers took up arms and went to the mountains. Over the next 36 years a war engulfed the entire territory of Guatemala. Meanwhile, pro-American dictators succeeded each other in office, making a crackdown on dissidents. Among others, the leader of the local Communists Bernardo Alvarado Monzon was executed. The war ended only in 1996. A Native American activist Rigoberta Monchy who spoke against the dictatorship in 1992 received the Nobel Peace Prize.

In the past 15 years, Guatemala was finally able to catch its breath after the war. Presidents began to succeed each other in a democratic way. The current President Alvaro Colom who came to power in 2008 even started a policy relatively independent of the U.S. Today, the successor to the United Fruit called Chiquita Brands International no longer feels like the owner of the country.

However, the independence of Guatemala is not quite complete. On the first cry from Washington its former President was given to the United States. This means that the legacy of "banana republic" is still there.