Just baton them! Recipes of democracy from USA 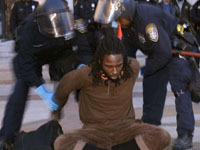 American police harshly disperse protesters of "Occupy Wall Street" that have been ongoing for nearly two months. Despite the fact that the protesters are supported by almost a half of the U.S. population, the authorities do not enter into a dialogue with them, preferring the language of batons, water cannons and tear gas. So much for the "true democracy".

The campaign began on September 17 in New York. Its participants speak against social inequality and the "greed of financiers." The police repeatedly applied force against its members. By September 25, 80 people were detained. Leading media outlets of the country tried to ignore the campaign for a long time, preferring to talk about the "march of democracy" in Libya and Syria, or "bad policy" of Russia, China or Venezuela.

However, on October 1 it was impossible to ignore the protesters any longer. Thousands of people took to the streets of New York and tried to block traffic on the Brooklyn Bridge. Police used batons, 700 people were detained. Extremely harsh actions of law enforcement agents caused outrage on the Internet, and then in the streets. The campaign spread across other cities in the U.S. first, and then dozens of other nations. In Italy there were also clashes with police.

All this time, U.S. leaders did not seek to negotiate with the protesters. Leading U.S. media chose to speak not about the "protesters" and "revolutionaries" (as in Libya and Syria), but the "rebels", although the protests spread as far as Boston, Philadelphia, Chicago, San Francisco and Oakland. The local authorities applied force of varying degrees. The demands of the demonstrators were rejected from the very beginninng, and police acted against them to the fullest.

Today, the police began the demolition of the camp of protesters in downtown New York. Some of the invaders left voluntarily, but some have decided to stand up to the last minute, erecting barricades. "Whose park is it? It is our park!" "Do not retreat, do not surrender" - these were the slogans of the protesters. The police threatened to arrest anyone who refused to obey. As a result, over 70 people were detained, and the camp was demolished by force.

The police of Oakland in California was particularly brutal. On October 25th Special Forces entered the city and broke the skull of one of the protesters, incidentally, a veteran of the war in Iraq. As a result the number of protesters who gathered in the streets has increased significantly. The city authorities have released four warnings calling the protesters to clear the territory of the central square. But people kept coming. The "cleaning" had to be repeated.

On November 14 the police Special Forces came to Oakland again and used tear gas against the inhabitants of the camp. 33 people were arrested and threatened with big troubles for participating in unsanctioned protests. Specially invited cleaners began dismantling the campground, and the process was controlled by a police helicopter. So much for freedom of speech and assembly.

A similar pattern was observed in the capital of Oregon, Portland. On Saturday police started dispersing the protesters, but they held out for another day until the Special Forces have arrived. They quickly swept away all the barricades of trash baskets. One person was seriously injured by a police baton and hospitalized. More than 50 people were detained.

Earlier the authorities of the capital of Texas, Austin, showed all their might. Demonstrators staged in front of city hall were banned from cooking and serving tables at night time. Organizers of the protest put the legality of the decision in question: it was not approved by the deputies of the city council, though it should have been. The authorities did not seem to think about the legality. On the night of October 30, police violently broke up a rally, and some of its members were charged with trespassing.

The chronicle continued. On October 28, over 50 people were detained in the largest city in Tennessee, Nashville. The same pattern was observed in San Diego, California, the state capital of Colorado Denver and Burlington in the north-east of the country, in Vermont. In Philadelphia and Minneapolis the law enforcement officers have not yet applied force. Canadian newspaper The Globe and Mail wrote that the police did not have enough people to keep order, which led to tough measures.

It is remarkable that no one from the administration of President Barack Obama or the Congress talked to the protesters. Meanwhile, the movement "Occupy Wall Street" is not the campaign of the marginal elements. Recently, The New York Times and CBS television station conducted a poll which showed that 43 percent of the Americans support the protesters, and only 27 percent do not support them. Among the youth the level of sympathy for the demonstrators is even higher.

It turns out that nearly half of all Americans want the change and are against the omnipotence of the corporations and tycoons. But the White House, the Capitol and city halls of the American cities prefer to ignore this. Preservation of the foundations of American capitalism is more important than democracy, and no one is allowed to undermine it. Those who try will be treated with batons in their face or tear gas.

This is the lesson in democracy from "the most democratic country in the world".