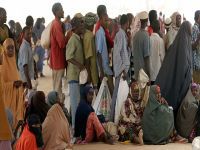 As if life was not already exasperatingly difficult for the Somali refugees, fleeing their war-torn and drought-stricken nation, now a cholera outbreak is spreading among those living in the overcrowded Dadaab complex of camps in Kenya. To compound the problem, efforts to deliver aid are hampered by insecurity.

Overcrowding in the camps, the ensuing breakdown in sanitary conditions and now, heavy rains, have provided a nightmare scenario in the Dadaab complex of refuges camps in Kenya, where ten cases of cholera have been confirmed by laboratory tests and a further sixty cases are suspected, according to Andrej Mahecic, spokesperson for the UN High Commissioner for Refugees. "Rains and flooding had affected the trucking of water to parts of the camps, and we fear some refugees resorted to using unsafe water from flooded areas," he stated yesterday in Geneva.

Around 400,000 refugees live in the Dadaab complex, the vast majority of these people having fled from Somalia, many of them women and children (the men stayed behind to protect the homes and whatever livestock have survived the drought and violence), 70,000 of whom arrived in recent months.

Cholera treatment centres have been set up to treat the worst cases and health workers have been instructed to help deal with the outbreak. Extra chlorine has been added to the water supply in the camps to kill the bacteria and basic hygienic practices are being divulged to the refugees.

Meanwhile conditions are hampered by the heavy rains and the increased levels of insecurity - three aid workers were recently kidnapped from the camps. These are described by the UNHCR as "continued incidents". Torrential rains in the Dollo Ado area have caused flash floods and have rendered the airstrip unusable for the past four days, so aid cannot be easily transported to where it is most needed.

With many of the children under five years of age showing high levels of malnutrition, the notion appears that humanity is starting at another time-bomb. Where is this story?