Germany may turn into Europe's center of ethnic clashes 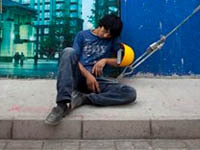 Germany is shocked. The local police discovered a neo-Nazi group, whose members had been murdering immigrants for several years. What is more, the members of the group served as informers for German special services.

German Chancellor Angela Merkel said that she was very ashamed of her country fellows; a special committee was set up in Bundestag. In the meantime, the problem of foreign migrants in Germany has been getting more and more intense.

On November 14, the German police announced the discovery of the group of three neo-Nazis, who had committed a series of murders of immigrants from other countries. The criminal ring was busted in Thuringia province. Another criminal was arrested in Hannover. All of them supposedly cooperated with National Socialist Underground, a banned Nazi terrorist organization.

The discovery of the group in Thuringia has left Germany in a state of shock. The perpetrators - one woman and two men - are suspected of killing at least nine immigrants between 2000 and 2007. In addition, in the beginning of the year, the group robbed a bank in Eisenach in eastern Germany. The police picked up their trail, but the two men committed suicide. The woman came to police several weeks afterwards and began to testify. Her testimony revealed horrifying details.

The "Thuringer Defenders of the Motherland" appeared at the end of the 1990s. From 2000 to 2007, the criminals killed eight Turks and one Greek national. Their victims presumably owned kiosks and small restaurants. In 2007, one of the gang members shot dead a police woman.

The neo-Nazis committed several terrorist acts, although the acts left no one killed. A bomb packed with nails blew up in 2000 at a railway station in Dusseldorf. Eight Jews, who were returning from German language classes, were injured in the explosion. Four years later, the gang blew up a bomb in the Turkish quarter in Cologne: 22 people were injured.

"You cannot help being left with the dreadful impression that the danger of right-wing extremist violence wasn't taken seriously enough," Thomas Oppermann, a member of the opposition Social Democrats (SPD) said.

"We're seeing something inconceivable - we suspect right-wing extremists are responsible for horrible acts of violence, for right-wing terror. It's a disgrace and mortifying for Germany and we'll do everything we can to get to the bottom of this. We owe that to the victims," Chancellor Merkel said.

Germany's minister of justice, Sabine Leutheusser-Schnarrenberger, asked authorities "to investigate with all means possible the dimensions far-right networks in the country have reached."

A special committee has been established in Bundestag to investigate the case of the criminal ring and its connection with German special services. The lower house of the German parliament plans to discuss the issue as well. It does not mean, though, that the parliamentary investigation will bring any results. Several German politicians put forward a suggestion to ban the far-right National Democratic Party (NPD) of Germany. This organization is considered a neo-Nazi organization. There were many attempts made in the country to ban the activities of the NPD, but the party still exists.

For the time being, there is no connection between the National Socialist Underground and the National Democratic Party. The party program points out the need to restrict immigration to Germany, although it does not urge anyone to violence against migrants. Therefore, the attempts to ban the National Democrats may mean that the "traditional parties" simply failed migration policies. Unlike other parties, the NDP raises the issue of migration on a regular basis.

There are at least 3 million people of Turkish origin living in Germany. Kreuzberg, a district in Berlin, is known as "little Istanbul." Signs in the Turkish language can be seen in the German capital practically everywhere.

Muslim migrants make up as many as six percent of the 80-million-strong Germany. It is worthy of note that the participants of the 9/11 terror attacks in the USA were visiting the mosque in Hamburg. The mosque has been recently closed.

There are also over 2 million immigrants from Poland, hundreds of thousands of Serbs, Croats, Greeks, Portuguese and African immigrants in Germany. Millions of Russian-speaking immigrants from the former USSR may not find it easy to adapt to the local environment. Many of those people speak very bad German, which annoys the local population, and this anger may take criminal forms at times.

The shocking story with the neo-Nazis revealed another unpleasant aspect. It turns out that German special services connive at neo-Nazi extremists. The investigation of the case will make Germany look at the immigration issue closer. However, if they eventually decide to silence all that, the "heroes" from the National Socialist Underground will have followers. As a result, Germany may turn into a large arena of inter-ethnic clashes. This may happen just because the German government prefers to turn a blind eye on the problem.